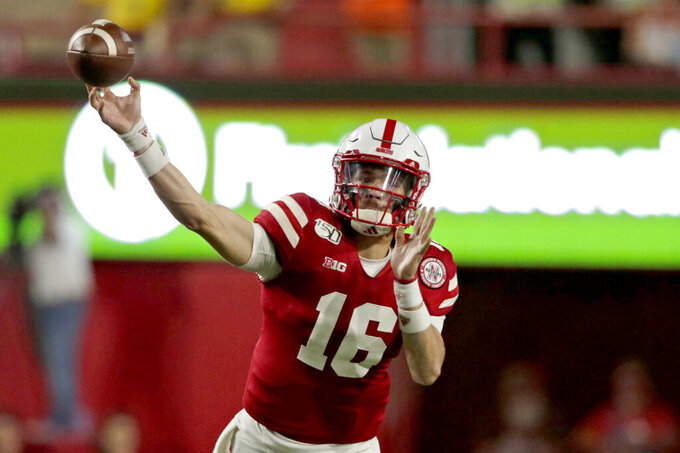 FILE- In this Sept. 14, 2019, file image, Nebraska quarterback Noah Vedral (16) throws a pass during the second half of an NCAA college football game against Northern Illinois in Lincoln, Neb. Nebraska began preparing for this week's game at unbeaten Minnesota as if sophomore Vedral would start at quarterback in place of Adrian Martinez, who limped to the sideline at the end of the third quarter of the Cornhuskers' win against Northwestern on Saturday and had ice on his left knee when he came out of the medical tent. (AP Photo/Nati Harnik, File)

At Indiana, the countdown is in full swing.

The Hoosiers have chalked up five wins in five consecutive seasons for the second time ever, and now they have five chances to get their elusive sixth win for the first time since 2017.

Around campus, where classes resumed Monday following a brief fall break, everyone knows the story. But inside the locker room, nobody's talking about numbers.

"We'll be asked about it, we talked about it this morning in that regard," coach Tom Allen said during his weekly news conference. "But it's about having a focus — that's the mental toughness it takes to be great in our program. I want it to be a point where that's part of the expectation. I understand it, I understand where we are, what's in front of us, and so do our players."

Indiana gets its first shot Saturday with a rare trip to Nebraska (4-3, 2-2).

Nebraska has won five straight in the series, most recently in 2016 in the only game between the schools since 1978. But Nebraska could be short-handed.

Coach Scott Frost didn't say Monday whether last weekend's bye allowed starting quarterback Adrian Martinez to recover sufficiently to return to the lineup. He missed the Oct. 12 loss at Minnesota because of an injured left knee. Odds-makers have pulled the game off the betting line.

If Martinez can't play, Noah Vedral will make his second career start. Vedral was 14 of 23 with 135 yards, had 15 rushes for 49 yards and was sacked four times against the Golden Gophers.

Nebraska hopes to prove its last game was an aberration.

"We weren't the most physical team on the field at Minnesota," tight end Austin Allen said. "That started shifting gears last week when we went good-on-good. We came off the ball firing on all cylinders, and that's going to carry over against Indiana."

This game also could be a program-changing moment for the Hoosiers (5-2, 2-2).

Indiana hasn't been above .500 in conference play since starting 1-0 in 2016, hasn't won consecutive Big Ten road games since the end of 2015 season, hasn't won three straight league games in the same season since 1993 and hasn't won in Lincoln since 1959.

"I want to change the way this program is viewed in the lifetime of our current players," Tom Allen said. "I just want to be able to create that change. And I've used the word breakthrough and that's a foundational vision I have. It has different layers and different meanings, but that hasn't changed."

Like Nebraska, Indiana may be without its starting quarterback. Michael Penix Jr. left in the first half last week at Maryland and did not return. Allen didn't disclose the injury following the game and didn't shed any more light Monday on what happened to Penix , other than to say he will be a game-time decision.

If Penix doesn't play, Peyton Ramsey, a two-year starter who lost the job to Penix this summer, would likely make his third start of the season.

If so, Ramsey would get a chance to do something neither he nor the Hoosiers achieved the last two years — win No. 6.

"It's a little different dynamic than we have been in the last two years," Tom Allen said. "But you talk to any of our players, there's no mention of winning six. Obviously you win the next game, you win your sixth game and we understand what all that means. But to me the objective is for us to be at our very best and play our best football in Lincoln, Nebraska."