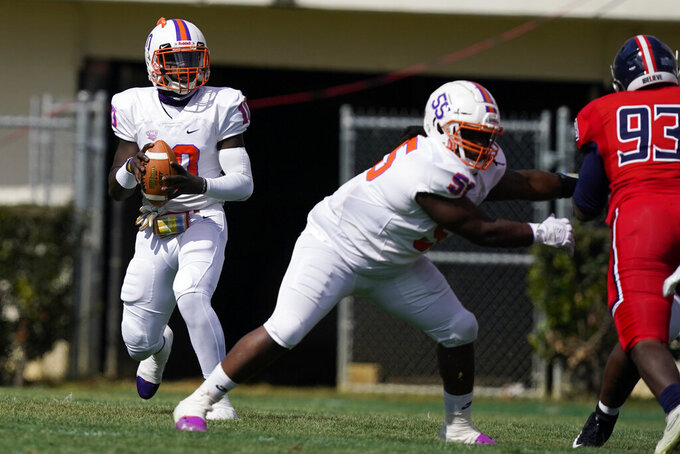 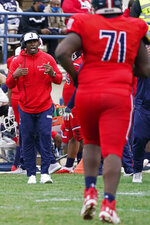 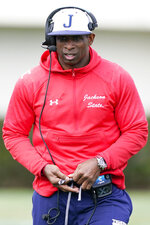 Jones completed 18 of 20 passes for 187 yards and TD passes to Newman, Daylen Baldwin and Christian Allen. JSU racked up 435 yards of total offense to Edward Waters 104.

After a week of rare freezing weather had many residents of Jackson waiting in long lines for bottled drinking water, the atmosphere among 12,000 fans sprinkled within Mississippi Veterans Memorial Stadium (44,215 capacity) was festive.

National Guard soldiers shot a cannon and did pushups after Jackson State scores, and Sanders, an NFL Hall-of-Famer, had a bucket of ice dumped over his head at the end of the game as the people in the stands cheered the win.

Jackson State dominated, scoring on its opening drive and adding two more touchdowns in 67 seconds, wrapped around an Edward Waters fumble on a kickoff, to end the first half 31-0.

Jackson State had elected to receive to open the second half and scored in just under three minutes after a 50-yard kickoff return set the Tigers up at Edward Waters 47.

Prior to kickoff, former Dallas Cowboys quarterback Troy Aikman surprised Sanders on the field with a hug and conversation. Aikman and Sanders played together on the Cowboys from 1995-99 and won the 1995 Super Bowl. Aikman received a COVID-19 test before heading down to the field.

Jackson was hard hit by the deep freeze and icy roads last week with nearly all of the 161,000 residents without running water, which created a dilemma for Sanders and his staff when they all went out to find dinner. Restaurant after restaurant was closed, he told the Clarion Ledger. Until ... the lights of a McDonald's beckoned in the darkness.

“We rolled up there, all happy, ready to spit the order out, and ain’t nobody there. We were just sitting there at the drive-thru but it really wasn’t a drive-thru, just a drive stop. So now I have a problem. I’m starving, man.”

Jackson Fire Department’s Station 5 showed up with a healthy heaping of food for Sanders and his staff. You can find his video of the feast on Instagram @deionsanders.