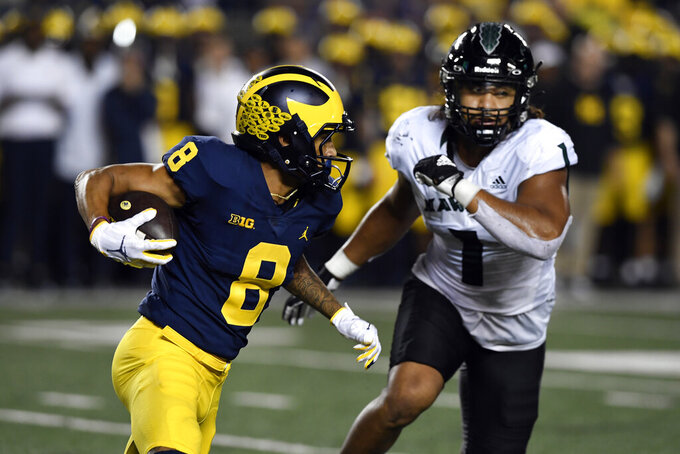 Michigan wide receiver Ronnie Bell, left, rushes with the ball as he is chased by Hawaii linebacker Penel Pavihi during the first half of an NCAA college football game, Saturday, Sept. 10, 2022, in Ann Arbor, Mich. (AP Photo/Jose Juarez)

McCarthy was sharp in his first start, throwing for three touchdowns to help No. 4 Michigan overwhelm Hawaii 56-10 on Saturday night.

Wolverines coach Jim Harbaugh said McCarthy will be the team's first-string quarterback next week against Connecticut.

McCarthy had his turn to take the first snap after Big Ten championship-winning quarterback Cade McNamara had a lackluster performance in the season-opening win over Colorado State as the starter.

The sophomore made the most of his opportunity against the Rainbow Warriors, throwing a 42-yard touchdown pass to Roman Wilson on his second snap and 13-yard pass to Ronnie Bell early in the second quarter to give the Wolverines (2-0) a four-touchdown lead.

McNamara entered the game with 6:22 left in the first half and took a sack to end his first possession.

McCarthy went back in and threw for his third score, dropping back and stepping up in the pocket before connecting with Cornelius Johnson for a 17-yard touchdown late in the first half to give Michigan a 42-0 lead.

“I can’t remember having one like that myself," said Harbaugh, a former Michigan and NFL quarterback.

McCarthy, a former five-star recruit, finished 11 of 12 for 229 yards without a turnover.

“He controlled the game," said Blake Corum, who ran for 88 yards and a touchdown on nine carries. “He was confident. I expected nothing less."

McNamara started the second half and the senior finished 4 of 6 for 26 yards with an interception.

“He’s got gravel in his guts," Harbaugh said. “He’ll be ready for his next opportunity."

The Rainbow Warriors (0-3) were scoreless until late in the third quarter when Matthew Shipley made a 26-yard field goal, taking advantage of favorable field position following their second sack of McNamara.

With Michigan backups getting a chance to play, freshman Tylan Hines ran for a 54-yard score to make it 49-10.

“What an experience for these guys that get to play here, and play an opponent like that," Hawaii first-year coach Timmy Chang said. “I’m proud of them. I’m proud of how they played four quarters, but it was a tall task for us.”

Wilson, who hails from Honolulu, caught a touchdown pass on McCarthy's first throw and ran for a 21-yard score after the quarterback casually flipped it to him on an end-around.

“I think he knew almost everybody over there," Bell said. “He probably had a big weight on his shoulders and to play the way he did is awesome against his hometown."

Harbaugh said he did not have an update on running back Donovan Edwards, who was injured in the first half after he had 26 yards rushing and a score on three carries along with a 33-yard reception while lining up as a wide receiver.

The game was scheduled to start at 8 p.m., but lightning in the area cleared the stadium before the game and led to a 1-hour delay.

Hawaii: Chang, a former star quarterback at the school, is facing quite a challenge. The Rainbow Warriors opened the season with two home games and lost 63-10 to Vanderbilt and 49-17 to Western Kentucky. Chang is following Todd Graham, who resigned as coach in January after former players and some parents criticized his management style and relationships with players.

Michigan: Before the season began, Harbaugh said he would decide on his Week 3 starter after both McCarthy and McNamara had a shot to start a game. McCarthy's talent as a passer and runner gave him an edge in the competition. McNamara accomplished a lot last year, but he has struggled this season and that has led to him losing his role as starter.

The Wolverines will likely remain ranked No. 4 because the teams ahead of them in the AP Top 25 also won their games.