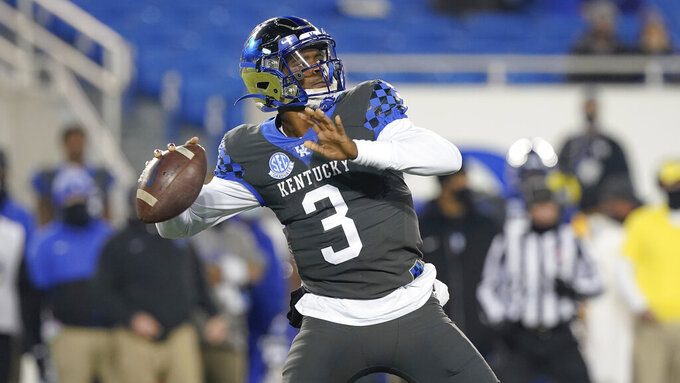 JACKSONVILLE, Fla. (AP) — Kentucky's postgame locker room provided a scene players and coaches might never forget. They celebrated a third consecutive bowl victory while dedicating it to two guys who couldn't be there.

This one was for late offensive line coach John Schlarman and rehabbing linebacker Chris Oats, who has been battling a significant medical condition since May.

A.J. Rose ran for a career-high 148 yards, Chris Rodriguez added 84 yards and two scores and the Wildcats held off No. 24 North Carolina State 23-21 on Saturday in a chippy TaxSlayer Gator Bowl.

“It was extremely emotional, even walking into the locker room we were saying, ‘That was for (Oats), that was for Schlarman,'" said linebacker Jamin Davis, who finished with 13 tackles and an interception.

“It's definitely something to show to the younger guys that we just keep playing through all the adversity, whatever's going on around us, all the outside noise," Davis added. "Just block it out. ... We've got to keep going regardless.”

Christopher Dunn missed two field goals for the Wolfpack (8-4), who trailed 16-14 late when Bailey Hockman threw his third interception of the game. Rodriguez scored on the ensuing play, going nearly untouched for 26 yards.

NC State got a final chance after Jordan Houston scored with 1:10 remaining. But Allen Dailey recovered Dunn’s onside kick, and the Wildcats (5-6) ran out the clock. Coach Mark Stoops got a Gatorade bath following the team’s second straight win, which ended a tumultuous season that included Schlarman's death following a two-year battle with cancer.

“John was definitely looking down on us; Coach Schlarman definitely inspired us all,” said Rose, who was named Kentucky's bowl game MVP. “Offensive line did a great job today. They were moving people all around all day. I give credit to all five of those guys.”

Kentucky finished with 281 yards on the ground, helping offset one of the nation’s worst passing attacks.

“Those are four really good run defenders against a really good rushing offense,” NC State coach Dave Doeren said. "We were concerned coming into the game about it. Not that we stopped the run; we didn’t. But we did enough and kept them off the scoreboard enough to give ourselves a chance.”

Zonovan Knight, who led the Wolfpack with 52 yards rushing and a touchdown, was named the losing team's MVP.

Penalties were a problem for both teams. There were 11 unsportsmanlike conduct penalties and several more instances where a flag could have been thrown.

“I got to get them cleaned up and I will. That's not us; we're not going to accept that," said Stoops, who blamed part of it on being unfamiliar with the Big 12 officiating crew. “When you get in these bowl games, you're not used to certain officials, and I've got to do a better job preparing us for that.”

North Carolina State: The Wolfpack were looking to end the season on a five-game winning streak. It would have been the first time the program had accomplished the feat since 1965.

Kentucky: The Wildcats won their third bowl game in as many seasons for the second time in school history. They also won three straight between 2006 and 2008.

North Carolina State almost surely will fall out of the final Associate Press College Football poll, which is scheduled to be released following the national championship game on Jan. 11.

North Carolina State: Junior center Grant Gibson, who played every snap in the regular season, seemingly tore a ligament in his left knee while celebrating the team’s first touchdown. Gibson and receiver CJ Riley jumped in unison, but Gibson crumpled to the ground after his landing.

Kentucky: Kentucky cornerback Brandin Echols was knocked out in the third after getting walloped by teammate Vito Tisdale. Echols, a senior, appeared to vomit on the field before getting helped to the sideline.

North Carolina State: Opens the 2021 season at home against USF on Sept. 2.

Kentucky: Opens at home against Louisiana-Monroe on Sept. 4. It will be 65-year-old coach Terry Bowden’s debut with the Warhawks.