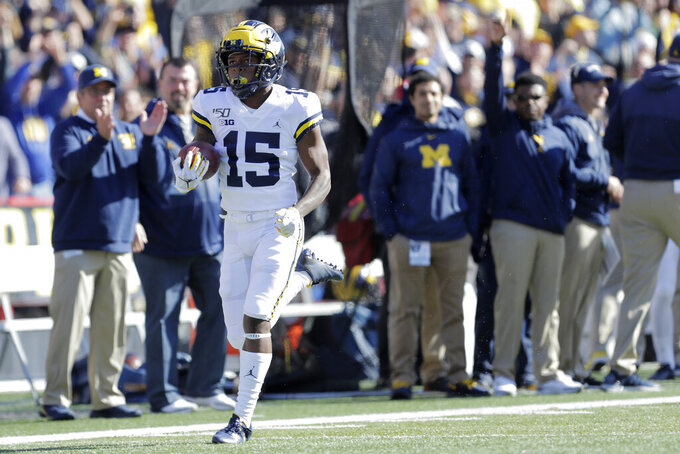 Michigan's Giles Jackson returns the opening kickoff for a touchdown during the first half of an NCAA college football game against Maryland, Saturday, Nov. 2, 2019, in College Park, Md. (AP Photo/Julio Cortez)

COLLEGE PARK, Md. (AP) — In a Big Ten matchup between Michigan and Maryland, Giles Jackson and Javon Leake each returned a kickoff 97 yards for a touchdown.

The difference was, Jackson's dash down the right sideline came on the opening kick, which helped make Leake's third-quarter jaunt irrelevant to the outcome.

With Jackson getting things started in ideal fashion for No. 14 Michigan, the Wolverines cruised to a 38-7 victory Saturday.

After Maryland won the coin toss and deferred the decision to the second half, Jackson picked his way through the Terrapins to give Michigan the lead for good with exactly 11 seconds elapsed.

"It's a great way to start a game," Michigan coach Jim Harbaugh said. "You can't start any faster than returning the opening kickoff for a touchdown. It was really well-blocked."

Maryland followed with a three-and-out, and the Wolverines made it 14-0 on the first of two touchdown runs by freshman Zach Charbonnet.

Michigan quarterback Shea Patterson went 13 for 22 for 151 yards. It was hardly his finest performance, but he didn't have to be great after Jackson went the distance with the opening kick.

"We always try to start fast, and that was a big emphasis coming into this game on the road," Patterson said. "It was cool to see him take off and set the tone for the game."

That wasn't the only fashion in which the Wolverines' special teams contributed. Michigan used a successful fake punt to set up Charbonnet's second TD, and a partially blocked punt led to a third-quarter touchdown run by Hassan Haskins for a 35-0 lead.

Leake followed with his second kickoff return for a touchdown this season. It was the most notable play for Maryland among a selection of few.

"Consistency is critical, and we're still a work in progress," Locksley said.

Down 14-0, the Terrapins embarked on successive drives that fulfilled Locksley's quest to burn up the clock and keep the Wolverines off the field. But one march ended with an interception, and the other concluded with a botched 37-yard field goal try.

"When you do that, shorten the game like we tried to do, we've got to execute, especially in the red area — which we didn't do," Locksley said.

Give some of the credit to the Michigan defense, which limited Maryland to 233 yards and not a single point.

Late in the first half, the Wolverines lined up to punt on a fourth-and-1. Michael Barrett took a short snap and ran for 14 yards, Patterson followed with a 51-yard completion to Nico Collins and Charbonnet capped the drive with an 8-yard TD run.

"We needed that fake punt, we needed it pretty badly," linebacker Josh Uche said. "That kind of killed their spirit."

Michigan: The Wolverines appear to be playing their best football of the season. "Collectively, as a group, we're playing at our highest level," Patterson said. "As group right now, we're hitting our stride."