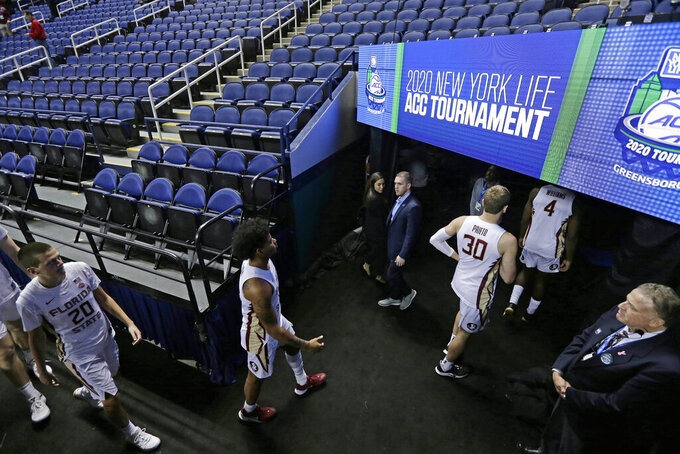 FILE - In this Thursday, March 12, 2020, file photo, Florida State players leave the court after the NCAA college basketball games at the Atlantic Coast Conference tournament in Greensboro, N.C., were cancelled due to the coronavirus. A year after the worldwide coronavirus pandemic stopped all the games in their tracks, the aftershocks are still being felt across every sector. (AP Photo/Gerry Broome, File)

It’s the predictable rhythm of sports that draws us in.

Not so much the results of the games themselves as the steady cadence of the seasons -- the cutting down of nets and hoisting of trophies, the pregame hype and postgame deconstructions, the trade talk and injury crises that envelop each passing year with the regularity of an atomic clock.

So, when two NBA basketball teams were hastily sent back to their locker rooms, not to return, after pregame introductions on March 11, 2020, and, then, a day later, when two college basketball teams walked off the floor at halftime and also didn’t come back -- “Game Ppd, pandemic” -- it was a shock to the system.

It was one thing for the still-nascent collection of COVID-19 numbers, the interviews with lawmakers and the warnings from Dr. Anthony Fauci to overtake CNN, Fox News and MSNBC. Quite another for all those updates to find their way onto ESPN.

It was a sign that the steadily streaming loop of games we play, and watch – games that have been played amid crisis, in the aftermath of catastrophe and that even resumed less than a week after the 9/11 terrorist attacks -- could no longer be taken for granted. For the first time in anyone’s memory, sports were as much at the mercy of an uncontrolled, unpredictable and ever-changing health crisis as any other segment of life.

A year after the worldwide coronavirus pandemic stopped all the games in their tracks, the aftershocks are still being felt across every sector.

It’s true in the pros and colleges, where leagues and conferences found themselves scrambling to figure out how to resume in bubbles, pods and cohorts. Once jam-packed, stadiums are now being used as mass vaccination venues or, in cases where they’ve reopened their gates to significant numbers of fans, scapegoated as potential superspreader sites. The goal of it all is a return to something resembling “normal,” to get back to providing the masses with the programming they sorely missed while still accounting for the high risk the players take for the sake of our round-the-clock entertainment (and, yes, their millions in salaries and profit).

It‘s also true at the grassroots, where little leagues, swim teams, gymnastics camps and running clubs all went dark, leaving the very existence of their businesses, to say nothing of the sports they fortify from the ground all the way to the elite and Olympic levels, up in the air.

And at the outdoor playgrounds and courts and courses, which were shuttered, roped off and padlocked for weeks, sometimes months, before slowly gaining cachet as a new, somewhat safer haven for millions of restless citizens shut in by government mandate, or fear, or concern, or some combination of the three.

Some of what was lost, or stopped, has come back over the ensuing 12 months, with the rapid development of a vaccine and a sometimes-begrudging acceptance of mask-wearing and social distancing becoming norms that are now being relaxed in certain parts of the U.S. In many cases, lessons learned in sports have been applied to society in general, and helped make things better. The NFL, for instance, offered a veritable instruction manual for bringing large groups back into the workplace. (You must have resources, however.)

But the sporting life at all these levels does not look the same, and some of it might never look “normal” again.

“Urinals, water fountains and hot dog stands where someone hands you food directly; buying game programs and taking ticket stubs home; athletes signing autographs and passing a pen back to you,” said sports marketing guru Joe Favorito, spelling out just a short list on how the fan experience has changed for good.

Said media expert Dennis Deninger: “We will never return to the old model of sending commentators, analysts and producers to every game that is going to be broadcast.” It will save money but come at a cost, he said: “The broadcast product cannot help but be diminished if those who we as fans count on to be our eyes and ears at an event are not there.”

Indeed, we as sports journalists have become comfortable forgoing the locker rooms for interviews via Zoom. The whole concept of “access” will generate debate for what’s left of the media when the world regains its health and sports discovers its new normal.

The prospect of sports without reporters or fans in the stands went from a far-flung germ of an idea to an everyday reality. I worked on a story a year ago this week that never saw the light of day. Topic: What would the NCAA Tournament look like without fans? There was no NCAA Tournament. There will be one this year, albeit in front of 25% capacity crowds and with the entire three weeks’ worth of games packed into one city, Indianapolis.

One takeaway that is as relevant today as it was a year ago came from the esteemed media commentator Bob Thompson of Syracuse: A big part of the show IS the fans – the crying flute players, the painted chests, the cheerleaders. Without all that, he said, sports wouldn’t feel quite the same, the TV program wouldn’t be as fun, maybe the popcorn wouldn’t taste as good, even if the games did go on as planned.

How right he was.

To be sure, LeBron James, Tom Brady and the LA Dodgers may very well have won titles even had the seasons not been contested amid the very different, pandemic-altered sports landscape that underscored the 2020-21 sports calendar. The championships were as richly deserved as any they’ve collected, maybe even more so given the new protocols and hurdles that had to be cleared to get to kickoff or first pitch, or even the next day’s practice.

But a shortened season, or a playoff series in a bubble, or a game played on the road against the backdrop of piped-in crowd noise and completely empty stands is … just that. Not normal. Not what we’re used to. Not quite the “real thing.”

The International Olympic Committee is holding out hope that its 2020 Games, now planned for the summer of 2021, might bring a semblance of normalcy back to sports and the world in general. Like or dislike the leaders who run that enterprise, there might not be a return as badly needed as this one.

To be sure, the billionaires will still get theirs whether the games go on or not. But the thousands of athletes who make up the backbone of the Olympics, and the smaller, grassroots organizations that fund their training – some of them multimillion-dollar operations, but many more just ma-and-pop-sized nonprofits – cannot survive much longer without the revenue and spotlight afforded by this global sports extravaganza.

For all its warts and conflicts of interest, college sports, and college football specifically, also helps underwrite many members of those Olympic teams, to say nothing of the dreams of thousands of amateur athletes – fencers and rowers and swimmers and even football and basketball players -- whose last chance at glory will come not as a highly paid professional, but on campus. Last week, the perennial football powerhouse at the University of Alabama boldly stated it intended to play all its football games during the 2021 season in front of 100% capacity crowds. There’s much money to be made by allowing folks to watch the Tide roll in person. Is this good? Bad? You be the judge.

“Business and education, for example, will never be able to fully wean themselves from the convenient technological tricks they’ve learned over the last year,” Thompson said in a follow-up email last week. “But sports are another matter. Close physical proximity of the players is a fundamental property of the games, packing in crowds is built into the architecture and economies of the venues that present those games, and the behavior of viewers who watch them on TV never changed that much in the first place.”

And when we’re not shuffling into the stands or watching on TV? Simply playing the games we love has become a much different enterprise, as well.

At first, we were warned that it might not be safe even to pass someone while running on an outdoor trail, lest the droplets from a passerby’s deep breath or cough be trapped into your own airstream and lead to a COVID-19 case.

Golf courses closed. Tennis courts were padlocked. Parents took their kids to playgrounds, only to find them cordoned off with yellow crime-scene tape.

All those lockdowns ended up feeling like mere hiccups in the grand scheme of things. Using proper hygiene – keep the flag in, trade a fist bump for a handshake -- golf turned out to be the perfect social-distancing sport. There were nearly 60 million more rounds played in 2020 – an increase of 14 percent over the previous year -- across America and golf pros spoke of seeing members back at their clubs who they hadn’t seen in years.

There were more hikers, more campers -- anyone try to buy a mountain bike in 2020? These were signs that people were finding more ways to make their own outdoor fun, albeit with a steady dose of caution and social distancing attached.

But not all the numbers spiked. An estimated 6,000 gyms and fitness facilities shuttered as they, along with so many other businesses, asked the government for help, while also trying to come up with new, safe models to stay relevant — and open.

A survey by The Aspen Institute found kids were spending about 6 ½ hours less per week playing sports during the pandemic than they had before. Participation in youth leagues suffered — especially in low-income areas where virus-fighting resources weren't as readily available — as parents weighed the risks of putting their kids in crowded hockey rinks or dugouts versus the need for some socialization, some exercise and, yes, a chance for their children to hear a different adult voice beseeching them for action.

To survive, all the leagues and camps weren’t that far removed from the NBAs and NFLs and MLBs in this way: They had to rethink their way of doing business, leaning into hand washing, sanitizer, thermometers, contact tracing and, ultimately, not taking so much for granted.

“A huge paradigm shift,” youth-sports expert Bill Kerig called it. “If you think about it, going back a year and a half, there wasn’t a single youth or amateur sports organization that would have asked all its athletes every day: ‘How do you feel?’”

But if sports taught us anything over this last harrowing year of COVID-19, it’s that, whether we’re on an NFL gridiron or tossing a ball in our own backyard, we need to keep asking each other that question. And listening to the answers.