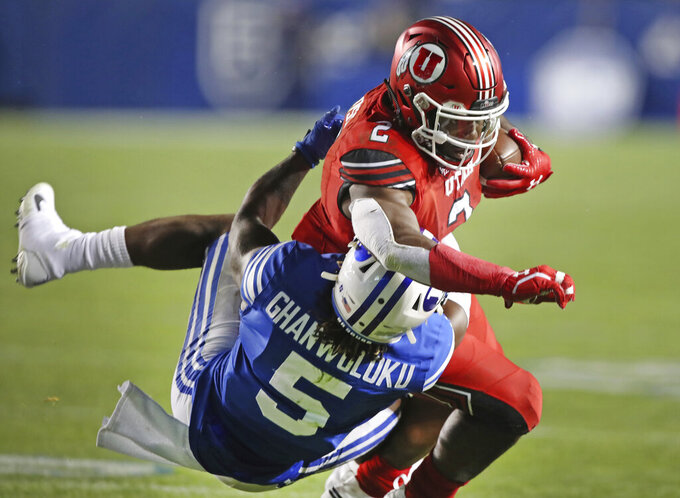 BYU defensive back Dayan Ghanwoloku (5) takes down Utah running back Zack Moss (2) in the second half during an NCAA college football game, Thursday, Aug. 29, 2019, in Provo, Utah. (AP Photo/George Frey) 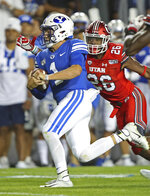 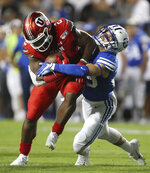 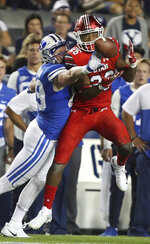 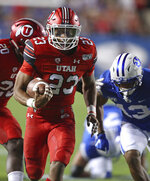 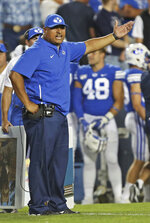 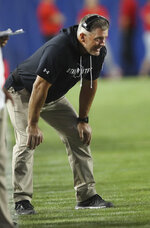 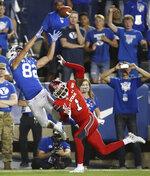 PROVO, Utah (AP) — Utah's defense picked up where it left off last season. BYU paid a steep price for it.

The No. 14 Utes scored three touchdowns off three BYU turnovers to pull away for a 30-12 victory on Thursday night in the opener for both teams. Utah left no doubt about how strong its defense could be this season.

Over the final 30 minutes, the Cougars gained just 104 yards on 18 total plays.

"We heard all the time about how they had a great offense," safety Julian Blackmon said. "They have a great team for sure, but we know that man-for-man we're the better team. So at the end of the day, we just wanted to come out and prove that."

Utah's defense did its part, and Zack Moss highlighted the offensive effort.

Moss ran for 181 yards and a touchdown to help the Utes (1-0) earn their ninth straight victory in the 100th game in the Holy War rivalry.

The senior suffered a hand injury in fall camp and wore a protective splint after the game. It didn't seem to limit it him at all. Moss propelled the offense after halftime by gashing the Cougars for a series of big runs. He averaged 6.2 yards on 29 carries.

"It was a big confidence builder for me," Moss said. "I had so many nerves coming into this game. Just getting hit a few times really hurt at first, but I was just able to start to be myself again. It was good to go out like that."

"It's hard to spot them two touchdowns on pick-sixes," BYU coach Kalani Sitake said. "That's difficult for a defense and we felt we were getting in some good positions. I'd like our guys to respond better, defensively, especially those last nine minutes."

Utah gained just 125 yards in the first half. The Utes totaled only three points on their first two drives after starting on their own 40 and the BYU 33.

With their offense sputtering before halftime, the Utes turned to their defense get some points on the board. Utah took a 9-3 lead in the second quarter when Francis Bernard stepped in front of a wobbly pass from Wilson, as he tried to avoid a sack, and returned it 58 yards, untouched, for a score.

"We just shot ourselves in the foot pretty much every drive in the first half," tight end Matt Bushman said.

Utah's offense sprang to life on the opening drive of the third quarter. Jaylen Dixon capped an 11-play, 75-yard drive with a 2-yard sprint to push the Utes' lead to 16-6. Moss gave Utah a spark with back-to-back 14-yard gains that moved the ball to the BYU 44.

The Utes capitalized on two more BYU turnovers and put the Cougars away in the fourth quarter. Moss punched in a 4-yard touchdown after Mika Tafua recovered a fumble by Williams at the BYU 22. Then, Julian Blackmon returned an interception 39 yards to put Utah up 30-6 with 12:25 remaining.

A lightning delay with 9:01 left in the fourth quarter suspended play for 54 minutes before the game resumed at just after midnight local time.

Utah endured a rare off night on special teams. UCLA transfer Andrew Strauch went 1 of 2 on field goal attempts, making his first kick from 41 yards and then missing from 25 yards on the opening play of the fourth quarter.

Strauch also missed his first PAT attempt in the second quarter, snapping a streak of 182 consecutive made PATs by the Utes dating to 2014. It was the third-longest such streak in the nation heading into the game.

Jadon Redding took over at placekicker for the remainder of the fourth quarter.

"Special teams were a disappointment tonight," Utah coach Kyle Whittingham said. "We've got to be much better on special teams."

Getting defensive scores have become a staple for Utah in rivalry games with BYU during the Utes' nine-game winning streak. Since 2011, the Utes have return six interceptions and three fumbles for touchdowns.

"That's what great defenses do," Whittingham said. "They make big plays and they score."

Utah: Just like a year ago, the Utes woke up from a first-half slumber and dominated on both sides of the ball over the final 30 minutes. Utah allowed BYU to gain just 29 yards in nine plays on the Cougars' first three second-half drives. The Utes also forced back-to-back turnovers that allowed them to score 21 unanswered points and put the game out of reach.

BYU: Mistakes doomed the Cougars yet again against their archrival. BYU's defense held Utah's offense in check during the first half and gained 196 yards on offense. But three turnovers led to 20 points for the Utes and turned a close game into a blowout.

A dominant second-half showing could see the Utes climb a spot or two in the poll on Monday.

Utah: The Utes host Northern Illinois in their home opener on September 6.

BYU: The Cougars travel to Rocky Top for the first time to take on Tennessee on September 6.