No. 15 UTSA aiming for first C-USA West title against UAB 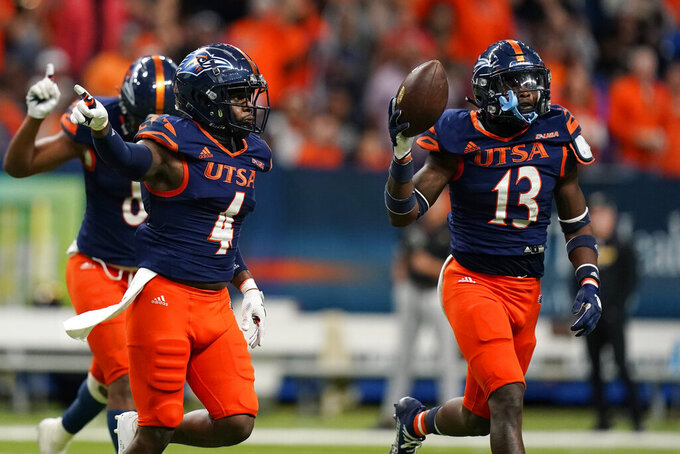 SAN ANTONIO (AP) — UTSA coach Jeff Traylor admitted the pressure of being undefeated and an overwhelming favorite impacted the Roadrunners in a narrow victory last week against Southern Miss.

Now the pressure really ratchets up.

UTSA hosts defending Conference USA champion UAB on Saturday at the Alamodome. The Roadrunners’ dream season and the league’s West division title are on the line. No. 15 UTSA (10-0, 6-0 C-USA) are seeking their first conference title but have lost four straight to the Blazers (7-3, 5-1).

“To be a champ, you’ve got to beat the champs and the champs are coming here Saturday,” Traylor said. “To win the first one is always the hardest one.”

In their 10th season, the Roadrunners have already set program records for total points and victories and are bowl eligible for the second straight season. UTSA, Georgia and Cincinnati are the only undefeated FBS teams.

The one thing the Roadrunners have not done is win a conference or division title, but the momentum has been building for this matchup.

“They’ve had an unbelievable season,” Blazers coach Bill Clark said. “Coach Traylor has done an incredible job. We have been seeing this thing building.”

UTSA’s only victory against UAB came in 2013, the Roadrunners’ second season and first in C-USA. The Blazers have since won four straight by an average of 20.3 points, including a 52-3 victory in 2018.

“I would rather have this type of pressure than have no pressure at all,” Roadrunners receiver Zakhari Franklin said. “It’s a time in my life that I won’t forget, forever.”

To do so, UTSA will have to put up a better effort than it did Nov. 13 against Southern Miss. The Roadrunners trailed 17-10 in the third quarter and had to rally to escape with a 27-17 victory against the Golden Eagles (1-9, 0-6).

“I think our kids feel the burden and the weight of this city and knowing the responsibility they have in getting this program turned around and that shouldn’t be on 18 to 23-year-old men,” Traylor said. “Those kids should be having the time of their life.”

Traylor said UTSA could simplify their game plan and play faster against UAB to ease the pressure.

The Roadrunners will rely on an offense that has scored 386 points this season, eclipsing the school record of 379 points over 13 games in 2016. UTSA quarterback Frank Harris has passed for 2,306 yards and 20 touchdowns and junior Sincere McCormick has rushed for 1,150 yards and 11 TDs.

“Offensively they are very dynamic,” Clark said. “They’ve got the great running back. Got a quarterback now that can do it all, he can run, he can throw. Big up front, big tight ends, big receivers, they are explosive.”

The Roadrunners average 446.1 yards per game, but the Blazers are limiting opponents to 321.3.

UTSA was selected to finish second to UAB in the West in a preseason poll of media members. For UTSA, the heightened expectations were also a warning not to “eat the cheese” and fall into a trap.

Traylor first warned the Roadrunners about getting complacent and buying into any hype following their 51-48 victory over rival Texas State on Sept 12, 2020.

“It was a different kind of questioning back in the day,” Traylor said. “Once we upset Texas State, we just went and bought rat traps for everybody. Nobody fell for it.”

CLOSED FOR THE GAME

UTSA senior tight end Leroy Watson has become one of the most popular players in the program’s history. He's funny, selfless — and he can cook: Watson’s wings and cajun chicken alfredo dishes have become huge favorites among UTSA’s players and coaching staff.

“(His teammates) decided to kind of come over and steal food one day,” Watson said, chuckling. “They told me I should probably try to sell. I decided, why not.”

Watson formed an LLC and opened, “Leroy’s Kitchen.” His business has been on hiatus this season as the Roadrunners attempt to secure their first C-USA title.

“They’ve been mad at me,” Watson said. “I haven’t been able to (cook) since we’ve been winning so much, but I’ll probably start doing it next month.”

UAB’s lone C-USA defeat was against Rice, 30-24, in the Blazers’ homecoming game Oct. 23. UTSA defeated Rice 45-0 at the Alamodome in its season’s seventh game.

Traylor handed out treats to UTSA students this week as has been his tradition prior to home games. Traylor gave out slices of pie this week after handing out cookies, tacos and pizza in the past.