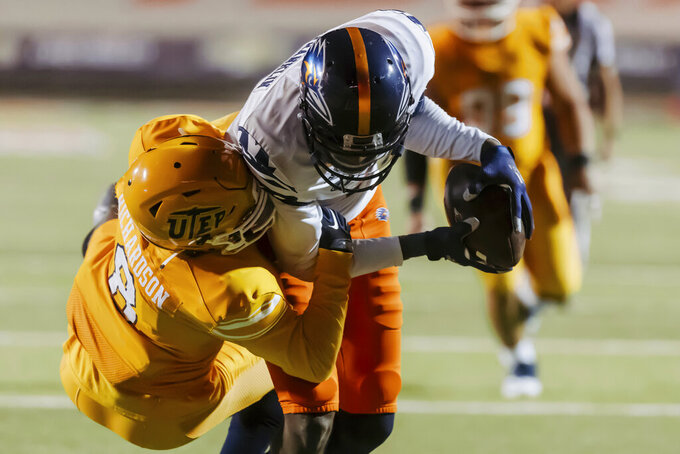 Line: UTSA by 33 1/2, according to FanDuel Sportsbook.

UTSA’s historic season can continue with a victory. The Roadrunners received the first national ranking in the program’s 10-year history on Oct. 17, entering the AP Top 25 at No. 24. On Monday, they entered the College Football Playoff rankings for the first time. Southern Miss needs to win at least once in its final three games to avoid its worst season since going 1-11 in 2013.

UTSA has one of the nation’s leading rushers in Sincere McCormick, but its passing game has become a huge weapon. Senior quarterback Frank Harris has completed 173-of-254 passes for 2,079 yards and 18 touchdowns. Southern Miss has allowed opponents to pass for 18 touchdowns and 80 first downs. Opponents are also averaging 8 yards per reception against the Golden Eagles.

Southern Miss: DL Josh Carr Jr. has been one of the few bright spots for the Golden Eagles. The 6-foot-4 lineman leads the team with 4.5 sacks and is third in total tackles with 41, including 21 solo.

UTSA: WR Zakhari Franklin has 55 receptions for 686 yards and eight touchdowns. Franklin needs nine yards to surpass a school single-season record for yards receiving that he set last season. He is also UTSA’s career leader in receiving yards with 1,757 in three seasons.

Frank Gore Jr. leads Southern Mississippi with 608 yards and a touchdown on 142 carries. … UTSA set a school record for total victories last week, surpassing the 8-4 mark during its inaugural season in 2012. ... The Roadrunners are 9-1 at home under coach Jeff Traylor, including seven straight victories. … UTSA, Cincinnati, Georgia, and Oklahoma are the only remaining unbeaten FBS teams. … Traylor is 16-5 with the Roadrunners, the best 21-game start at UTSA.