No. 15 UTSA hosts UAB with Conference USA West on line 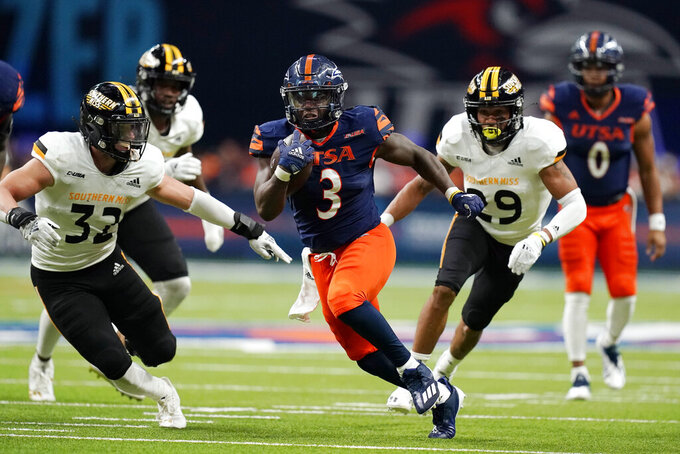 Line: UTSA by 4.5, according to FanDuel Sportsbook.

The Conference-USA West Division title is at stake, but there is added significance for UTSA. The Roadrunners have a national ranking and undefeated season on the line. UTSA’s 10-year program will also be enhanced if they can upend the three-time defending C-USA West champions. UAB could compete for its third C-USA title in four seasons with a victory.

UTSA wide receiver Zakhari Franklin has become a tough matchup due to his speed and hands. The 6-foot-1 junior has 57 receptions for 745 yards and eight touchdowns despite regularly encountering double coverage this season. The attention Franklin receives has helped the Roadrunners pass for 23 touchdowns and average 257 yards receiving. UAB is allowing 210 yards passing and has nine interceptions.

UTSA: QB Frank Harris has led the Roadrunners to the most prolific season in the program’s 10-year history. Harris has accounted for 2,705 yards and 24 touchdowns but is coming off his worst performance this season. He completed 17 of 30 passes for two touchdowns and two interceptions and had a season-low quarterback rating of 30.5.

UAB: Blazers running backs DeWayne McBride leads the team with 942 rushing yards and 10 touchdowns. McBride rushed for 114 yards and two touchdowns against Marshall, staking UAB to a 14-0 lead on its way to a 21-14 victory.

UTSA running back Sincere McCormick was named a semifinalist for the Doak Walker Award for the second consecutive season. The junior from nearby Converse is eighth in the nation in rushing with 1,150 yards and also has 11 touchdowns. … The Roadrunners have combined with their opponents to score more than 54 points in six of 10 games this season. … UTSA, Georgia and Cincinnati are the lone remaining unbeaten FBS teams. … The Blazers defeated the Roadrunners, 21-13, in their previous meeting Oct. 3, 2020. … UTSA wide receiver Joshua Cephus has 60 receptions and six touchdowns while averaging 68.7 yards receiving per game. … UAB quarterback Dylan Hopkins has 1,723 yards passing with 11 touchdowns and four interceptions. He is completing 63% of his passes.