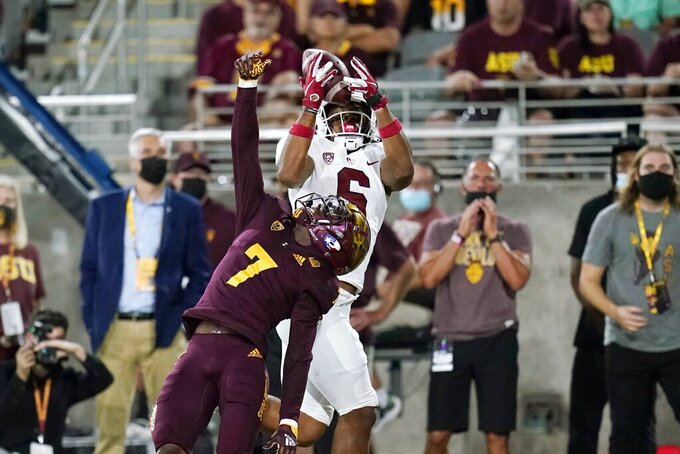 TEMPE, Ariz. (AP) — Jack Jones stepped in front of the receiver, caught the ball and held it out with one hand. Just before he hit the ground, the Arizona State defensive back caught a glimpse of Deandre Pierce and tossed it to his teammate for a spectacular touchdown.

The Sun Devils' run game was just as impressive.

Pierce scored a 27-yard touchdown on a lateral off Jones' interception and No. 22 Arizona State rode its explosive run game to a 28-10 win over Stanford on Friday night.

“When you run for 200-plus, you're going to win a lot of games,” Arizona State coach Herm Edwards said. “It was fun to watch the runners run.”

The Sun Devils (5-1, 3-0 Pac-12) exploited one of the nation's worst run defenses, racking up 255 yards and three touchdowns on the ground. Jayden Daniels provided the balance, throwing for 175 yards and running for 76 more, including a 51-yard touchdown.

Their defense gave up some big plays in the passing game, but kept the Cardinal out of the end zone in the second half and created three turnovers — none more exciting than the interception and lateral.

“When I got it, I knew it was me and the receiver on an island,” Jones said. “I turned around a 'Dre was there. Luckily he caught the ball.”

Stanford (3-3, 2-2) had no answer for Arizona State's run game and became one dimensional offensively after falling behind, limited to 9 yards rushing on 20 carries.

Tanner McKee threw for 356 yards and a touchdown, but had his first three interceptions of the season, including Pierce's back-breaking TD in the third quarter.

“We got into position multiple times and stalled,” Stanford coach David Shaw said. “The defense gave the offense opportunities in the second half and the offense didn’t take advantage.”

Both teams were coming off big wins.

Stanford took down Oregon 31-24 by sending the game to overtime with a touchdown on an untimed final play of regulation.

Arizona State picked up one of its biggest wins under Edwards, knocking off then-No. 20 UCLA 42-23.

The Sun Devils kept rolling against the Cardinal with an onslaught of big plays.

Daniels scrambled through a hole up the middle, ran away from two Stanford defenders who collided and raced off for a 51-yard touchdown run on Arizona State's opening drive.

Raachad White scored on a 5-yard run, one play after leaping a defender for a 29-yard gain. The Sun Devils pulled off consecutive trick plays covering 54 yards, the second Elijhah Badger's 22-yard TD run on a reverse to lead 21-7 at halftime.

“When we get off to a fast start, it puts us in a good position,” Daniels said.

Arizona State's offense stagnated in the second half, but the defense came up with the big plays when it needed.

Stanford had some early success on offense and scored when McKee hit Elijah Higgins on a 6-yard corner fade. The Cardinal stalled after that and McKee threw his first interception of the season on a pass that caromed off two players’ hands in the closing seconds of the first half.

The interception-lateral TD put Arizona State up 28-10 in the third quarter and Jordan Clark came up with Arizona State's third interception when McKee threw behind a receiver in the fourth.

“We just weren't able to finish our drives,” said Stanford tight end Benjamin Yurosek, who had six catches for 118 yards. “We've got to get better.”

Stanford's run defense was no match for the hard-running Sun Devils and its offense was nearly all passing after the Cardinal fell into an early hole.

Arizona State has put together consecutive impressive wins with power running, good decision-making by Daniels and an opportunistic defense.

Stanford lost kicker Emmett Kenney to what appeared to be a left hip injury after kicking an extra point after the Cardinal’s first touchdown.

The freshman, who got the start with Joshua Karty out, grabbed his left hip after going down and was on the field for several minutes before being helped off the field without putting any weight on his left leg.

“He wasn't in any pain in the end there, but we'll see what he's like next week,” Shaw said.

Ryan Sanborn kicked a 32-yard field goal in the third quarter and had 48-yarder negated by a holding penalty in the second.