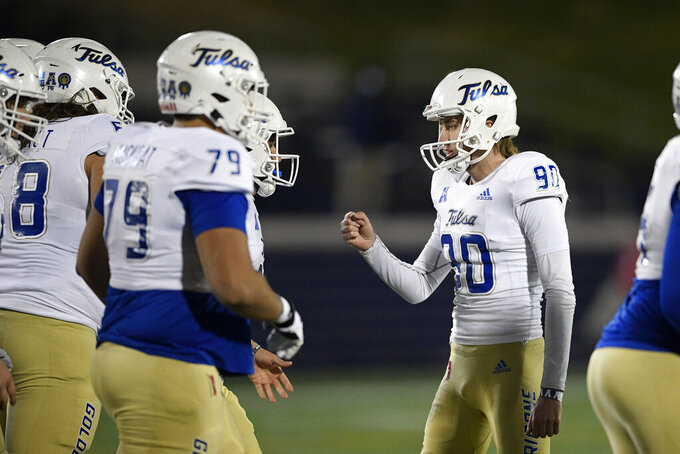 The Golden Hurricane (6-1, 6-0, No. 24 CFP) needed to win one of their final two games to play for the AAC championship. Tulsa will face Cincinnati at home next weekend before taking on the Bearcats for the league title on Dec. 19.

Navy (3-6, 3-4) will bring a four-game losing streak into next week's clash with archrival Army. The Midshipmen produced only 153 yards in offense and lost their home finale for the first time since 2002.

The score was tied at 6 late in the third quarter before Smith lofted a long pass between four Navy defenders into the waiting arms of Johnson, who outdistanced his pursuers in a 40-yard sprint to the end zone.

It was one of few bright spots for Smith, who went 10 for 25 for 168 yards in Tulsa's lowest-scoring effort since a season-opening 16-7 loss to Oklahoma State.

Zack Long kicked his third field goal for Tulsa with 10:58 remaining for a 10-point cushion.

Facing a third-and-8 from his own 40 with less than four minutes to go, Smith connected with Keylon Stokes down the right sideline for a 37-yard gain that set up another field goal.

Navy managed only 71 yards in the first half and didn't score until Bijan Nichols kicked a field goal just before halftime to make it 6-3.

The Midshipmen opened the third quarter with a 14-play drive that lasted nearly eight minutes and ended with a field goal to tie the score.

That fueled their hope of pulling off an upset, but Navy went three and out on its next two possessions while Tulsa finally found the end zone to take control.

Freshman quarterback Xavier Arline ran for 60 yards on 27 carries for the Midshipmen but managed only 27 yards passing on eight attempts.

During a scoreless first quarter, Navy failed to get a first down and totaled minus-4 yards on 11 plays. Tulsa eked out 64 yards on 22 plays, including 22 yards on a fake punt, but the Golden Hurricane lost a fumble and failed to convert a fourth-and-1. Tulsa has scored only 12 first-quarter points in seven games.

Though Smith played poorly for a sputtering offense, Tulsa took care of business in an efficient enough manner to retain its position in the Top 25. The point is, the Golden Hurricane have won six straight, and that's more important than style points.

Tulsa: The Golden Hurricane have a knack for doing what it takes to win. After averaging 33.6 points in its previous five games and rallying from behind in four of them, Tulsa never trailed and won on the strength of its defense.

Navy: The calling-card of a Navy team is its triple option, but this season the Midshipmen just can't seem to get their running game going. On the positive side, the defense put in another solid performance after last week's 10-7 loss to Memphis.

Tulsa hosts Cincinnati in a week-ahead preview of the AAC title game.

Navy faces its biggest rival, Army, on the road at West Point.