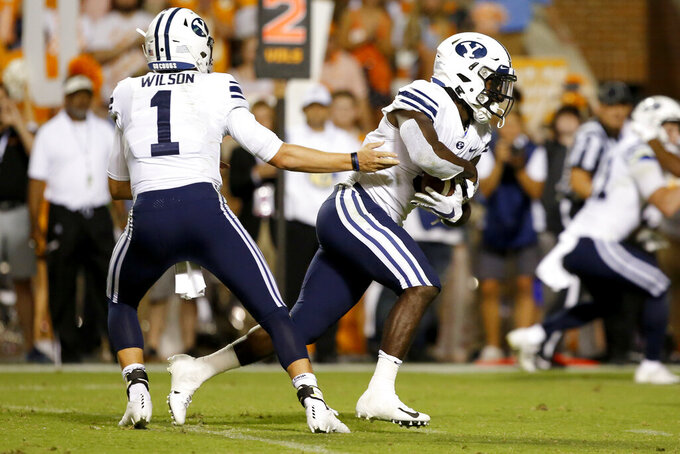 BYU quarterback Zach Wilson (1) hands the ball off to running back Ty'Son Williams (5) for what would be the game-winning 5-yard touchdown run during the second overtime against Tennessee in a NCAA football game at Neyland Stadium on Saturday, Sept. 7, 2019 in Knoxville, Tenn.(C.B. Schmelter/Chattanooga Times Free Press via AP)

USC is looking to start 3-0 for just the second time in eight seasons. BYU is searching for its first home victory over a Power Five opponent since 2016.

USC receivers against BYU secondary. The Trojans installed a version of the Air Raid offense mainly because the wealth of talent at receiver. USC returned its top four pass catchers from 2018. They combined for 2,448 yards and 16 TDs last season. BYU ranks 20th nationally in pass defense, allowing just 141 yards per game.

USC: QB Kedon Slovis and Velus Jones Jr. Slovis had an electric debut as the Trojans starting quarterback. Slovis threw for 377 yards and had 3 TD passes in a 45-20 win over Stanford, setting a team record for most passing yards by a freshman in their first start. Jones leads the Pac-12 with 30 yards per kickoff return, but BYU is allowing just 6.67 yards per kickoff return.

BYU: RB Ty'Son Williams and LB Kavika Fonua. Williams has found a groove in the Cougars' backfield. The senior is averaging 5.7 yards per carry. Fonua could be a key factor in dialing up pressure on USC's pass-happy offense. He totaled a career-high 10 tackles and snagged a key interception against Tennessee.

BYU is 8 for 8 in the red zone this season, with four touchdowns and four field goals. . USC leads the Pac-12 in blocked kicks. The Trojans have blocked 41 kicks or punts since 2010. . USC QB Kedon Slovis leads the nation in completion percentage (.829). . Williams and USC RB Vavae Malepeai are tied for ninth among FBS players with three rushing touchdowns. . USC has lost three straight games in the state of Utah dating to 2012. . BYU is 5-14 against Pac-12 opponents since going independent in 2011, with nine losses coming to Utah. . USC has scored in 276 consecutive games dating to 1997. ... BYU QB Zach Wilson has completed at least 60 percent of his passes in 8 of 9 career starts.