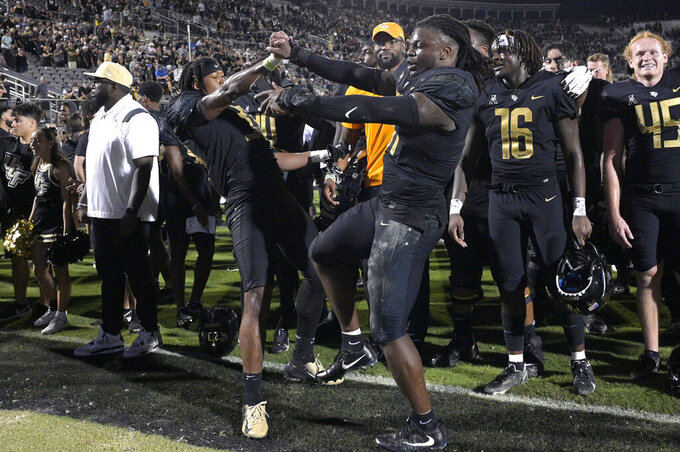 MEMPHIS, Tenn. (AP) — Gus Malzahn hopes his UCF Knights have learned an important lesson about consistency no matter where they're playing.

The 25th-ranked Knights get their chance Saturday when they visit Memphis still looking for their first road win in the American Athletic Conference. It won't be easy against the Tigers, who are refreshed from an open date and desperate to snap a three-game skid.

“The last time we went on the road we didn't handle it very well,” Malzahn said of a 34-13 loss at East Carolina. “We expect our guys to be in a different spot. ... We got momentum. We need to carry it over, and we need to play with the same energy and that same approach each game moving forward.”

UCF (6-2, 3-1 AAC) jumped into the 25th spot of the AP Top 25 after beating then-No. 20 Cincinnati 25-21 last week. It's the first time the Knights have been ranked since the third week of the 2020 season, and they're also still in the chase for the AAC championship.

The Knights visit Tulane next to cap a two-game road swing, the team they trail in the AAC standings. Malzahn hopes his Knights know they must stay focused on the road and try to be as comfortable there as they are at home where they are 7-0 with him as coach.

“I think because of that lesson learned two weeks ago I really feel strong we'll not do that again,” Malzahn said.

Memphis coach Ryan Silverfield is feeling a different kind of pressure. The Tigers (4-4, 2-3) have lost three straight, and a program that won the league championship in 2019 is working on a stadium renovation that could make Memphis more attractive to a Power Five conference looking to expand.

Two of the Tigers' three losses came by a combined three points. Silverfied and the Tigers are coming off an open date, so they're rested up. This also starts a three-game home stand for Memphis.

“Man it’s nice to be back and, I think our players know that and that’s part of the belief, the hope that we can get this going in the right direction,” Silverfield said.

John Rhys Plumlee is day to day after an injury knocked him out of UCF's last game, and Mikey Keene came in to lead the Knights to the big win. Malzahn said the Knights have two quarterbacks they can rely on.

Keene is as capable of running the same offense as Plumlee. But Malzahn said Plumlee will start if healthy enough.

“Mikey was in there and the team rallied around him,” Malzahn said. “It was just a good way to win a football game that will help us moving forward.”

The only game Memphis quarterback Seth Henigan has missed in his career was last year's 24-7 loss to UCF in Orlando because of an injury. He's healthy for this game and ranks second in the league and 18th nationally with 2,224 yards passing. Henigan has thrown 15 touchdowns and only five interceptions.

Henigan has heard the chatter about Silverfield's future possibly being at risk depending on how the Tigers finish.

“As long as we finish the rest of the season the right way, then I feel like the noise will quiet down a little bit and people will look back at the season and be like, that was a good team,” Henigan said.