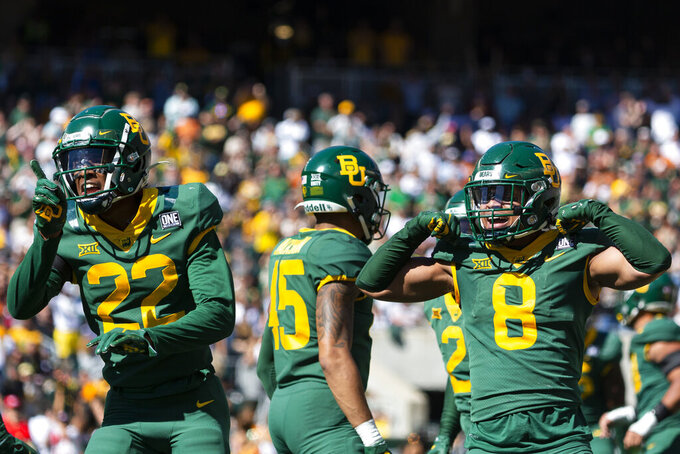 Baylor safety JT Woods (22) and teammate safety Jalen Pitre (8) celebrate after making a stop on defense during the second half of an NCAA college football game against Texas, Saturday, Oct. 30, 2021, in Waco, Texas. (AP Photo/Sam Hodde)

Line: Oklahoma by 6 1/2, according to FanDuel Sportsbook.

Oklahoma has won an FBS-best 17 games in a row, and is the league's only undefeated team. The six-time defending Big 12 champion Sooners are trying to get to 10-0 for the first time since 2004. Baylor still has a chance to get into the Big 12 title game for the second time in three seasons, but that got more difficult after last week's loss to TCU. When Oklahoma last visited Waco in 2019, the Sooners overcame a 28-3 deficit and won 34-31, the biggest comeback in team history.

Abram Smith and Baylor's Big 12-best rushing offense (230.9 yards per game) against the Sooners defense. Smith is already a 1,000-yard rusher this season, with 11 TDs rushing and a league-best 7.2 yards per carry. Oklahoma is third in the league allowing only 111 yards rushing a game, and only Iowa State has allowed fewer than the eight rushing TDs given up by the Sooners.

Oklahoma: QB Caleb Williams has completed 72 of 98 passes (73.5%) for 1,087 yards with 14 TDs and one interception since taking over midway through the second quarter against Texas, then starting the past three games. He's also run for 227 yards and three TDs of at least 40 yards.

Baylor: The Bears offensive line has allowed only one sack over the last four games, a span of 110 pass attempts. Only three teams nationally have allowed fewer than the seven sacks Baylor has given up this season.

The Sooners have won 23 consecutive November games, 11 of those against Top 25 opponents, since a home loss to Baylor in 2014. ... Baylor's defense has forced a turnover in 17 consecutive games. The Bears are one of eight teams nationally that haven't allowed an opponent to score more than 30 points. ... Jalen Pitre, who plays a hybrid linebacker/defensive back position for Baylor, is the only player in the country with three forced fumbles, three fumble recoveries and two interceptions.