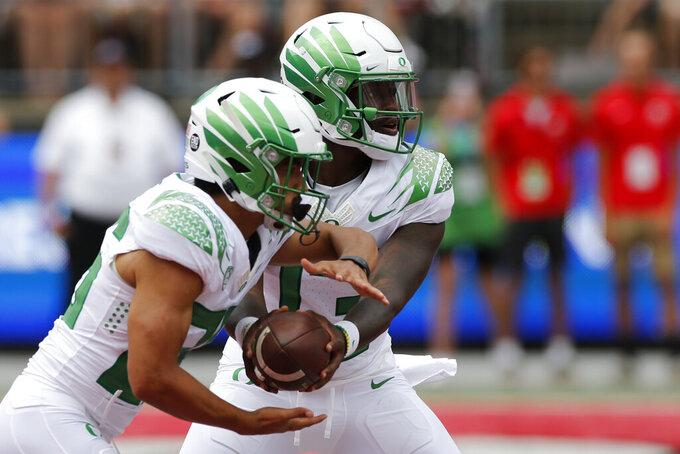 Oregon says the game against Stony Brook is a chance to get better, but mostly it's an opportunity to rest players who got beat up in last week's big win over then-No. 3 Ohio State. The Ducks jumped from No. 12 to No. 4 in the AP Top 25 following the win. Even if they sit their usual starters, the Ducks should have an easy time over Stony Brook. The FCS-level Seawolves are coming off a 24-3 victory over Colgate, but just don't have the size or skill level to match up with Oregon.

Stony Brook's offense against Oregon's hobbled defense. There's no word yet on Heisman hopeful Kayvon Thibodeaux's status for the Ducks, but linebacker Justin Flowe's injury appears serious and he's unavailable. Mase Funa and Keith Brown are also nursing minor injuries. The depleted defense could give the Seawolves a chance to get on the board.

Stony Brook: Running back Ty Son Lawton ran for 134 yards and a touchdown in Stony Brook’s win over Colgate, giving him more than 1,000 yards rushing for his his career. He has 12 career touchdowns, including two this season.

Oregon: Running back CJ Verdell had 195 all-purpose yards and three touchdowns against the Buckeyes. He ran for 161 yards and two scores, while catching three passes for another. He could put on a show against the Seawolves, depending on how long he plays.

Stony Brook hasn't played a Pac-12 team before. ... The Seawolves are 1-10 against FBS teams, with their lone win coming against Army in 2012. ... The Ducks have won 13 straight games at home. ... Oregon's No. 4 ranking is its highest since it ended the 2014 season at No. 2. ... Oregon has won 27 straight non-conference games at Autzen. ... Oregon quarterback Anthony Brown leads the Pac-12 with 529 yards of total offense. He threw for 236 yards and two touchdowns against Ohio State.