No. 6 Clemson looks to rebound against SC State 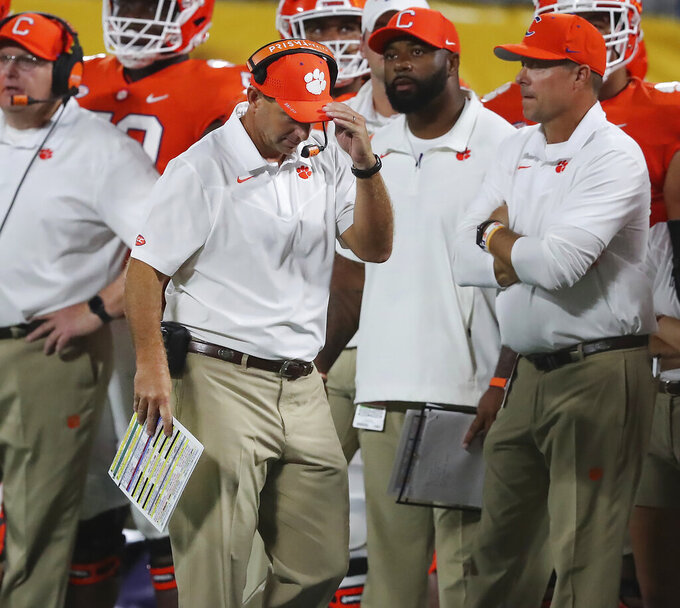 Clemson coach Dabo Swinney reacts after a sack while walking the sideline during the second half of the team's NCAA college football game against Georgia on Saturday, Sept. 4, 2021, in Charlotte, N.C. (Curtis Compton/Atlanta Journal-Constitution via AP)

Clemson's long run of success against FCS schools. The Tigers have won all 35 games against FCS schools since the NCAA split Division I in 1978. Their average margin of victory in those games is more than 35 points. South Carolina State is looking to spring perhaps one of the biggest upsets in college football history.

Clemson QB D.J. Uiagalelei vs. South Carolina State's defense: Uiagalelei is looking to make a splash after the way Clemson played in a 10-3 loss to No. 2 Georgia. The Bulldogs might be in trouble. They gave up 569 yards and 28 first downs in a 42-41 loss to Alabama A&M last week.

South Carolina State QB Corey Fields Jr.: He was a big part of the Bulldogs offense last week, throwing for 213 yards and running for a 54-yard touchdown. If he can find a way to elude Clemson's experienced defensive front, Fields could make some problems for the Tigers.

Clemson WR Justyn Ross: Ross was a NFL quality receiver his first two seasons at Clemson before missing last year due to neck surgery. He's gotten the green light to return and struggled to make catches against Georgia. Ross could get his season started in a big way against the FCS opponent.

Clemson hasn't been 0-1 since 2014 when it also opened with a loss to Georgia. ... The Tigers have outscored the 35 FCS opponents they've played by a combined score of 1,471-239. ... South Carolina State's last trip to Clemson came in 2016 where it lost 59-0. That was the second game of the Tigers' national championship season. ... Clemson offensive coordinator Tony Elliott got his coaching start at South Carolina State under current Bulldogs coach Buddy Pough. Elliott coached wide receivers there in 2006 and '07. ... The Tigers will look to get their running game going. In the first game without NFL first-round draft pick Travis Etienne, Clemson managed just two yards rushing against Georgia. ... The Tigers will be without two starting safeties. Landen Zanders injured his shoulder against Georgia and will need season-ending surgery. Nolan Turner will miss his second straight game due to injury.