No. 7 Oklahoma St. will find out Big 12 title game opponent 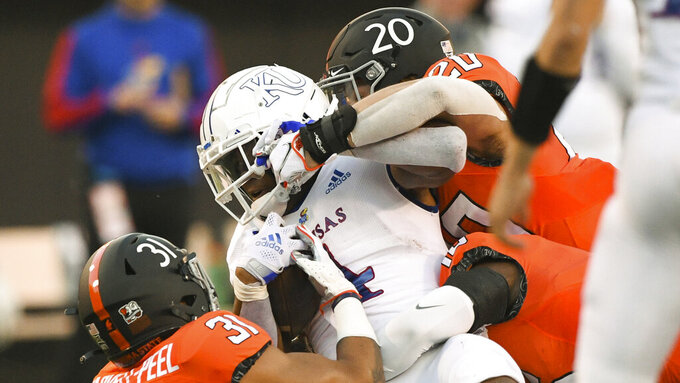 Things to watch on the final weekend of the regular season in the Big 12 Conference:

No. 10 Oklahoma at No. 7 Oklahoma State. There could be an unprecedented double dose of Bedlam this season. Oklahoma State (10-1, 7-1, CFP No. 7) has already clinched a spot in the Big 12 title game for the the first time. The six-time defending Big 12 champion Sooners (10-1, 7-1, CFP No. 10) will also get in the Dec. 4 game in North Texas with a win over Oklahoma State in the series' 116th meeting, or a loss by ninth-ranked Baylor to Texas Tech earlier Saturday. The Cowboys and Sooners have never played twice in the same season. Oklahoma has won six in a row in the series since 2014, and 16 of the last 18. Oklahoma State also won in 2011, the year of its only Big 12 championship, and when the league didn't have a title game. Come Saturday, the Sooners will have been Big 12 champions for 2,192 consecutive days.

Malcolm Rodriguez and the Oklahoma State defense vs. Kennedy Brooks and the Oklahoma offense. The Cowboys are coming off a shutout victory at Texas Tech, which had scored in 302 consecutive games since 1997, and have allowed only 164.3 yards per game and one total offensive TD their past four games. The Sooners are tied for the Big 12 lead with 52 offensive TDs, while averaging 442 total yards and 39 points a game. Brooks is only 28 yards rushing from his third 1,000-yard season. Rodriguez, a linebacker, is second in the Big 12 with 96 tackles.

TCU getting bowl eligible. The Horned Frogs (5-6, 3-5) needed a game-ending field goal last week to beat Kansas in their home finale. They now go to Iowa State (6-5, 4-4) on Friday as 15-point underdogs, according to FanDuel Sportsbook. TCU is 2-1 under interim head coach Jerry Kill, but those two wins are by a combined five points and there was also a 63-17 loss at Oklahoma State.

Kansas State running back Deuce Vaughn is averaging 101.4 yards rushing per game, and the sophomore also leads the Wildcats with 45 receptions for 464 yards and three scores. Vaughn is the only player in the nation who is a 1,000-yard rusher and 400-yard receiver. He is fourth nationally averaging 143.5 yards per game from scrimmage. Vaughn ran for 125 yards and two TDs against Texas last season.