No. 7 Utah wants to grow its long-range passing game 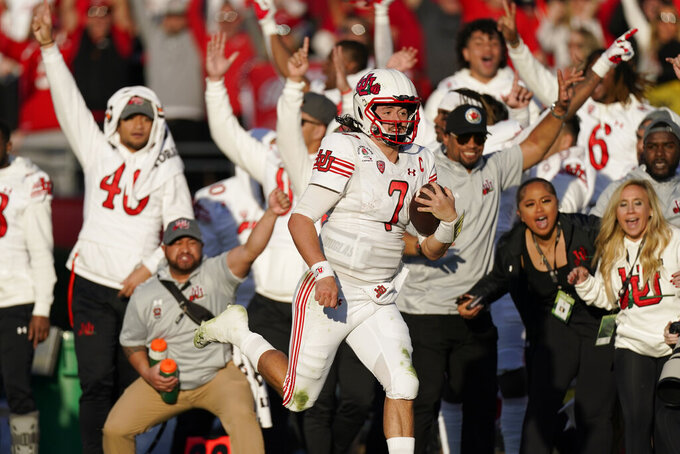 FILE - Utah quarterback Cameron Rising (7) runs for a touchdown during the first half in the Rose Bowl NCAA college football game against Ohio State Saturday, Jan. 1, 2022, in Pasadena, Calif. Rising isn’t facing a battle to be Utah’s starting quarterback heading into a new season. Rising cemented his spot atop the depth chart when he led the Utes to their first ever Pac-12 championship and Rose Bowl berth a season ago. (AP Photo/Mark J. Terrill, File)

It added a new dimension to a program that built its identity around punishing defense and elite special teams play in previous seasons under Kyle Whittingham. And for this season, the No. 7 Utes are focusing on making more big plays downfield.

“If we’re going to take the next step offensively in our evolution, it is being big-play oriented on the outside,” Whittingham said. “That’s the next phase and, really, the final phase.”

If quarterback Cam Rising can build on what accomplished a season ago, Utah has a chance to realize that goal.

Rising threw for 2,493 yards and 20 touchdowns while completing 63.8% of his passes and tossing only five interceptions. His accuracy, coupled with improved arm strength, means the Utes can afford to take more shots downfield.

Have five of Utah’s top six receivers back will make a difference, too. Rising stars like Devaughn Vele and Money Parks have an innate ability to stretch the field and should factor into a larger number of plays.

“They are some unbelievable playmakers, and they just make my job easy, so it’s just fun going out running the offense,” Rising said.

Utah is the preseason pick to repeat as Pac-12 champions, receiving 26 out of 33 first-place votes in the league’s media poll.

It’s an unfamiliar position for a program that’s usually the hunter instead of the hunted, but the Utes are still embracing an underdog mentality.

“We got to go attack it and go get it again,” Rising said. “That’s our goal and that’s what we’re working for.”

Senior tight ends Dalton Kincaid and Brant Kuithe are the Utes’ top two returning receivers. Kuithe led Utah with 611 yards on 50 catches a year ago, Kincaid added 510 yards on 36 receptions and the duo combined for 14 touchdowns.

“It’s hard for defenses to game plan both of us,” Kincaid said. “And then, if they focus on us, we have a mean backfield and we have mean guys outside who can push the ball downfield.”

Tavion Thomas did not lock down his spot as Utah’s primary running back last season until October because of recurring ball security issues. This season, he has a shot at becoming only the fourth Utah player to post back-to-back seasons with 1,000 rushing yards.

Thomas emerged from a crowded backfield last season to run for 1,108 yards while averaging 5.4 yards per carry. He also led the Pac-12 with a school-record 21 rushing touchdowns.

Britain Covey led Utah with 52 receptions a season ago and his departure to the NFL leaves a huge hole on special teams.

Vele, Parks, Jaylen Dixon and Clark Phillips III are all vying to fill Covey’s shoes as a return specialist, but the spot remains up for grabs.

“There’s not one guy that’s just said, ‘Hey, I’m the guy,’ and taken charge,” Whittingham said. “We have four or five options. We hope to continue to narrow them down.”

Utah opens its season at Florida on Sept. 3. It's the Utes’ first true road game against an SEC opponent since playing at Tennessee in 1984.

Linebacker Mohamoud Diabate transferred to Utah from Florida in the offseason. He led the Gators with 89 tackles during the regular season last year. He also made 17 starts and appeared in 37 games in three seasons with the program.

Diabate said it'll be fun and that "I still have a lot of love and respect for those guys and university.”