Pick Six Plus: A dream road trip to see the whole AP Top 25 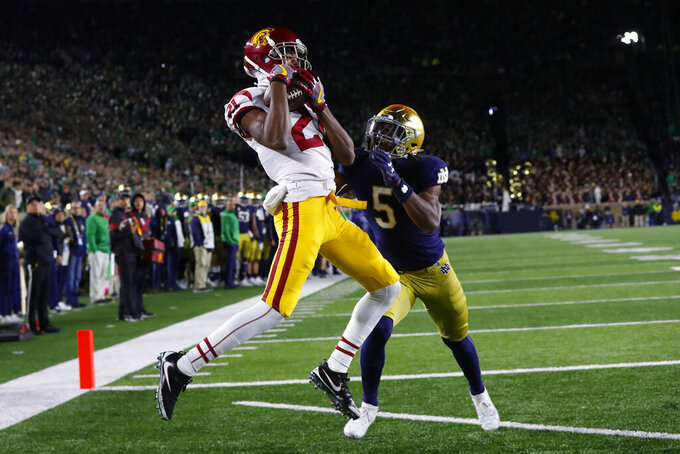 What does your dream college football road trip look like?

Would you travel the whole country or stick to one region? Do you want to see the traditional powers, or explore some of the sport's lesser-known venues?

A couple years ago, we mapped out our version of the college football's ultimate season-long trip — with only two rules:

1. We have to see every team in the AP's preseason Top 25 at least once.

2. The travel between games must be reasonable in the time available. If you're at Big Ten game at noon, don't plan on making it to SEC country for an evening kickoff that same day.

With the highly contagious delta variant causing problems around the U.S., this still may not feel like a completely normal college season, but the availability of vaccines makes this year different from 2020, and many fans are surely hoping they can safely return to stadiums — and perhaps take a trip to a road game or two.

So here's our attempt to size up the 2021 season with our own dream itinerary.

We start with a night game in Blacksburg. Justin Fuente may be on shaky ground at Virginia Tech, and his Hokies begin the season against a top-10 opponent. It's an intriguing matchup — and the time slot and location work nicely because ...

The drive from Virginia Tech to Charlotte is no problem, and well worth it for this clash between two teams that look like national title contenders. Georgia won't want to take a loss before its SEC schedule even begins, and Clemson will be eager to rebound from its one-sided playoff defeat against Ohio State.

The Cy-Hawk series takes center stage. For all that Matt Campbell has accomplished coaching Iowa State, the Cyclones still haven't beaten Iowa during his tenure.

The Ragin’ Cajuns are one of two Sun Belt teams to start this season ranked. We'll check them out when they host Ohio as the Bobcats move forward after coach Frank Solich's retirement.

There are three games that stand out on Cincinnati's schedule, against Indiana, Notre Dame and Central Florida. We'll pick this one against the Hoosiers, who are ranked in the preseason poll for the first time since 1968.

There are more interesting games on Miami's schedule — the Hurricanes open with Alabama, after all — but this Thursday night matchup fits in well, and Bronco Mendenhall's Cavaliers were in the ACC title game a couple years ago.

One of the big questions this season is how the SEC-bound Longhorns will be received as they travel around the jilted Big 12. Well, here's their first conference road game — and it's against an in-state rival. Enjoy.

The Aggies won every game they played last year except one — a 52-24 loss to Alabama. Texas A&M welcomes Nick Saban and the defending national champions to Kyle Field for this rematch. Both teams have to replace their starting quarterbacks this season.

These teams produced one of last year's most bizarre games — when the Gators lost on a last-minute field goal after one of their players was flagged for throwing an LSU player's shoe. The rematch is at Tiger Stadium.

The other ranked Sun Belt team, Coastal Carolina, is coming off an unbeaten regular season in 2020. The Chanticleers could have their hands full in this Wednesday night visit to Kidd Brewer Stadium.

Our first Notre Dame game was in Chicago, but the Irish will be back home in South Bend to renew one of the sport's greatest rivalries. Last year was the first time Notre Dame and USC didn't play each other since 1945.

The last team other than Ohio State to win the Big Ten was Penn State back in 2016. The Buckeyes have to replace Justin Fields, but there's little reason to expect any major slide.

The Pac-12 hasn't put a team in the College Football Playoff since 2016, and although the league has five ranked teams to start the season, none of them are in the top 10. By November, we should have a sense of whether anyone in the conference is making a push to join the nation's elite.

We might have to fly from the Bay Area to Seattle to make it to this game, but it should be doable. Oregon won the Pac-12 last year — after Washington had to pull out of the title game because of COVID-19 issues and was replaced by the Ducks. Of course, Washington had initially clinched its spot in the championship game because its game Dec. 12 against Oregon — which would have decided the division — was canceled. It's fair to say both teams will be hoping for a bit less drama in 2021.

A break in the trip, if only because this is the second straight game in the same venue. It's not ideal, but we haven't crossed Arizona State off the list yet, and this matchup looks more appealing than some of the others for the Sun Devils.

The last Top 25 team we haven't seen is Oklahoma, and by this point, Spencer Rattler might be closing in on the Heisman Trophy. This is a rematch of last year's Big 12 title game.

We've now seen all 25 teams in the preseason poll, so this last weekend is a free space. The Iron Bowl and Bedlam are options, or perhaps Michigan will rebound from its rough 2020 and pose a threat to Ohio State. We'll keep this slot open for now, knowing that by the time that weekend arrives, there should be plenty of big games to choose from.