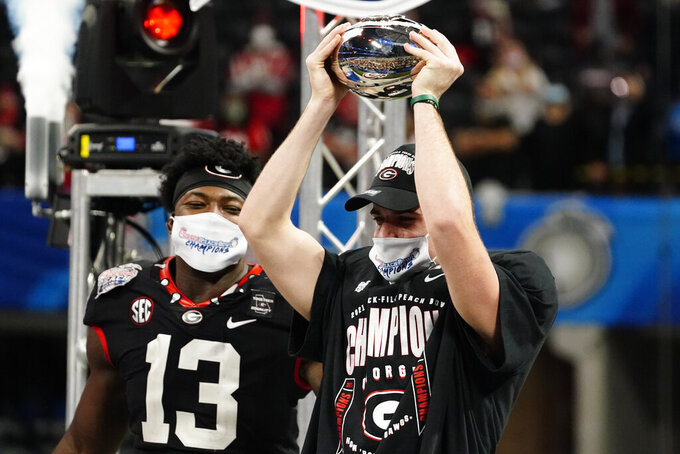 ATLANTA (AP) — Jack Podlesny told Georgia coaches before Friday's Peach Bowl that he felt confident attempting field goals from as long as 55 yards — a full 4 yards past his career best.

Podlesny made good on his claim, kicking a 53-yard field goal with three seconds remaining, and No. 11 Georgia handed No. 6 Cincinnati its only loss of the season with a dramatic 24-21 victory in the Peach Bowl.

Podlesny dropped to one knee following the career-long kick as his teammates surged onto the field. Asked what he was thinking while he was kneeling, Podlesny said he wanted to “try to remember why I'm here. ... God is good and it’s amazing to be here.”

Georgia trailed 21-10 in the fourth quarter, but its defense clamped down on Desmond Ridder and Cincinnati and JT Daniels helped rally the Bulldogs with his arm. Daniels, a Southern California transfer, passed for 392 yards while improving to a perfect 4-0 in four starts for Georgia.

Ridder completed 24 of 37 passes for 206 yards and two touchdowns. Jerome Ford added a career-long 79-yard touchdown run early in the second half but it wasn’t enough for the Bearcats.

Cincinnati (9-1, No. 8 CFP) was motivated to use the Peach Bowl to gain national respect. Coach Luke Fickell said the game was a measuring stick for his team.

“We’re not there yet,” Fickell said. “That’s what keeps motivating you, and I think that, you know, there’s a lot of things we’re going to take from this that we know we can do.”

On Georgia's final play before the decisive field goal, Daniels attempted a deep pass that fell incomplete. Asked why he didn't try a shorter pass that might have made the kick more manageable, Smart said: “I felt comfortable with where he was that he would have the leg strength to get there."

Ridder threw a 14-yard touchdown pass to Alec Pierce in the first quarter and added an 11-yard scoring pass to Josh Wyle late in the first half.

“We’ve been ready to play this game for a long time,” Ridder said. “It’s just, you know, disappointing, obviously, the way it ended.”

Daniels overcame an interception and a lost fumble to lead the comeback.

Cincinnati: Led by Ridder, the Bearcats answered any doubts the Group of Five team could match up against Georgia, from the Southeastern Conference. Ridder frustrated Georgia's defense with his mobility. Ford used his power to burst through the line and his speed to outrun the Bulldogs' defense on his 79-yard scoring run early in the second half.

Georgia: White's TD run in the fourth quarter was a rare highlight for a rushing attack that averaged only 1.9 yards on 24 carries. The Bulldogs played without backup running back James Cook, who was with his family following his father's death. Running backs coach Dell McGee wore Cook's No. 4 jersey on the sideline.

Coby Bryant's interception of Daniels' pass intended for George Pickens in the first quarter extended the Bearcats' streak of forcing a turnover to 20 consecutive games. It's the longest active streak among FBS teams.

Bearcats left tackle James Hudson was called for targeting and ejected late in the first half. Hudson lowered his helmet on a hit that knocked Georgia cornerback Tyson Campbell to the ground.

Despite the penalty, Ridder kept the drive alive with two more passes, including a go-ahead 11-yard scoring pass to Whyle.

Cincinnati: Ridder, a junior, is expected to announce his plans for 2021, a decision which could shape the Bearcats' offseason. The Bearcats are scheduled to open next season on Sept. 4 against Miami of Ohio.

Georgia: The Bulldogs, who are expected to return most of their top skill position players on offense, will open their 2021 season with a high-profile game against Clemson in Charlotte, North Carolina.