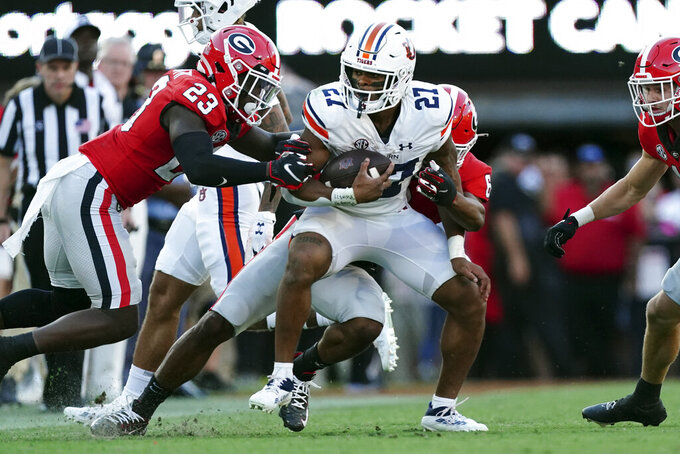 Auburn running back Jarquez Hunter (27) breaks away from Georgia defensive backs Tykee Smith (23) and Daylen Everette (6) after a catch for a touchdown during the second half of an NCAA college football game Saturday, Oct. 8, 2022, in Athens, Ga. (AP Photo/John Bazemore) 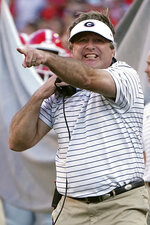 He found out “a day or two” before the Gators played top-ranked Georgia last year that he would be replacing Emory Jones in the latest edition of “The World’s Largest Outdoor Cocktail Party.” Richardson was excited for the opportunity. But when he stepped inside TIAA Bank Field hours before the opening kickoff, he started feeling some difference emotions.

“I’m not going to lie, I had a lot of jitters,” Richardson recalled this week. “I was in my head a lot. I was a little nervous. First career start against the No. 1 defense, so of course I was thinking a lot.”

He’s spent the past 12 months reliving it.

Richardson and the Gators were mostly overmatched and definitely overwhelmed in a two-minute span in the second quarter that was the difference in Georgia’s 34-7 victory. Richardson was knocked around and then knocked out of the game with a concussion.

His mistakes were costly. He fumbled to set up one touchdown late in the second quarter and threw an interception two snaps later that led to another score. He followed those with a pick-6 on the ensuing drive that put Florida in a 24-0 hole against the eventual national champs.

Richardson has waited a year for another shot at the Bulldogs (7-0, 4-0 Southeastern Conference).

“I feel like I’ve made huge leaps of improvement,” Richardson said. “There’s still a ways to go. I was actually talking about it the other day, time does fly. … It taught me a lot about football itself and how to manage the game and how to take control of the game.”

Georgia has taken control of the series, having won four of the last five and three of those in lopsided fashion. The Bulldogs are 22 1/2-point favorites in this one, according to FanDuel Sportsbook. It’s the third time in at least the last three decades that Florida (4-3, 1-3) has been a 20-point-plus underdog in a game.

The Gators were blown out both times previously, against Alabama in the 2016 SEC title game and at home against Florida State in 2013.

Maybe so, but Georgia usually delivers the knockout blows these days. Nonetheless, Richardson might be the difference-maker Florida needs to offset a defense that’s been mostly a punching bag since coming up with a goal-line stand against Utah in the season opener.

Richardson put on a show against the Utes. He was arguably better in losses to Tennessee and LSU. He threw for 452 yards and two scores against the Volunteers and dazzled the home crowd with a 51-yard TD pass and an 81-yard TD run against the Tigers.

“From the start of the season, Game 1, you watch every game in sequence and you say, ‘Man, this guy is growing and getting better,’” Georgia coach Kirby Smart said. “The toughest thing dealing with Anthony Richardson is how you affect him because you got to be careful. Some of the runs he’s had have been better than backs have across the country.”

Smart said there are no lessons to be learned from facing Richardson last season because Florida's offense is so different under first-year coach Billy Napier. He credited Napier's use of play-action passes and run-pass options that cater to Richardson's skills.

Georgia defensive tackle Zion Logue said Richardson is a big, physical quarterback regardless of the scheme.

Georgia ranks second in the nation in scoring defense, allowing 9.1 points a game despite having eight players from the unit selected in the 2022 NFL draft. Of the eight defensive picks, five were taken in the first round.

Napier and Smart go way back, both of them growing up as sons of high school football coaches in Georgia. Napier credits Smart with helping him land an analyst job at Alabama in 2011.

“Wouldn't be standing here today without him,” Napier said.