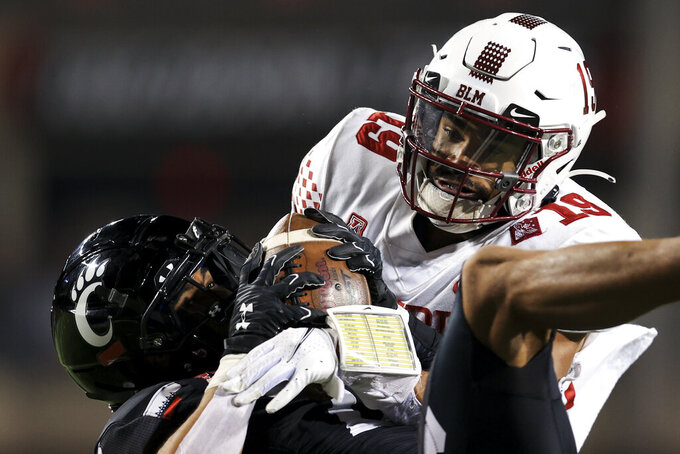 Jerome Ford ran for a career-high 149 yards and two scores to help the Bearcats (5-0, 1-0 American) avoid a letdown after their big victory at Notre Dame last week.

“First time really playing a complete game,” Bearcats coach Luke Fickell said. “Not saying perfect by any means, but a complete game. We talked about keeping that pressure on.”

The home streak is the second-longest in the country, behind Clemson at 31. Temple is the last team to beat the Bearcats at Nippert Stadium, edging them 35-24 in 2017.

Temple (3-3, 1-1) has played Cincinnati tough in recent years with the previous three meetings decided by a combined 20 points, including a 15-13 victory by the Bearcats in the last meeting in 2019.

The Bearcats figured to get off to a fast start against Temple, which was outscored 50-7 in the first quarter through the first five games.

They took advantage of a Temple mistake when Jadan Blue's muffed punt was recovered by Ja'von Hicks at the 13. Two plays later, Alec Pierce caught a 9-yard touchdown pass for a 10-0 lead. Pierce had six catches for 93 yards.

“I know he's a guy who I can trust to go up and get the ball,” Ridder said. “We've had a great connection and it's starting to show up in games.”

Ford had an 8-yard touchdown run to help the Bearcats build a 17-3 lead at halftime.

On the first snap of the second half, Ford found a gaping hole and sprinted 75 yards for a touchdown that made it 24-3.

“It was an inside zone play,” Ford said. “I saw a lot of space, then nobody around and it was just a foot race. The O-line was moving guys around tonight.”

Temple muffed another punt and the Bearcats cashed in with Tyler Scott's 38-yard catch-and-run touchdown that made it 31-3.

“Sometimes special teams is about being opportunistic,” Fickell said. “It's tough being on the road. It makes it tough for a defense, especially against an offense like ours.”

D'wan Mathis who threw for 614 yards and five touchdowns in Temple's previous two games, was held to 120 yards passing with an interception. He was sacked five times.

“We didn’t play good," Temple coach Rod Carey said. "We got down 10-0, but after that (muffed) punt, it got out of control. D’wan didn’t play well either but we have to protect him better.”

With no marquee matchups left on the Bearcats' schedule, Fickell was asked about gaining style points to impress the playoff committee. “I don't have a whole lot of style, my wife picks my clothes, so I don't know what you mean about style," Fickell said. "We like to play complete games and finish things out.”

Temple’s only points came on a career-long 55-yard field goal by freshman Rory Bell. It was the longest field goal by an Owls kicker since Don Bitterlich hit from 56 yards against Akron in 1975.