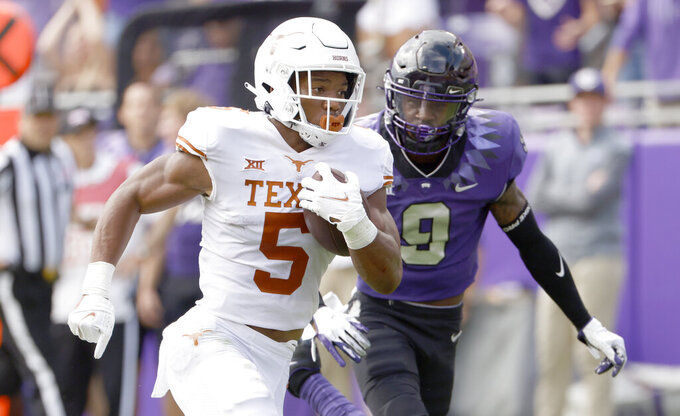 Texas running back Bijan Robinson (5) runs for a touchdown as TCU cornerback C.J. Ceasar II (9) pursues during the first half of an NCAA college football game Saturday, Oct. 2, 2021, in Fort Worth, Texas. (AP Photo/Ron Jenkins)

FORT WORTH, Texas (AP) — Bijan Robinson ran six consecutive times to open the final game-cinching drive for Texas, including a first down on a hard third-down run after TCU had called its last timeout. He then added 13 more yards before Casey Thompson got to kneel down on the last three snaps.

Robinson ran for a career-high 216 yards on 35 carries with two go-ahead touchdowns and those key late first downs in a 32-27 win Saturday, the first Big 12 road game for the Longhorns since accepting an invitation to join the Southeastern Conference.

“I just knew I had to get that first down, for the whole team to keep going forward and end the game,” Robinson said.

“No. 5 kind of epitomized our football team, the grit. He was exhausted," coach Steve Sarkisian said. “Thirty-five carries later, the last one was the most important one to get one more first down to seal the win. ... He's earned our trust.”

Thompson improved to 3-0 as the starting quarterback, even without the Longhorns finding the end zone at the same blistering pace as in his first two starts. He finished 12-of-22 passing for 142 yards with a touchdown and an interception.

TCU (2-2, 0-1) lost its second consecutive home game and had three turnovers, matching its total for the first three games. The Longhorns converted those into only three field goals by Cameron Dicker.

Robinson was stopped short on a fourth-and-goal from the 1 with 9 1/2 minutes left. The Horned Frogs then went 99 yards in 13 plays for Kendre Miller's 2-yard TD with 4:23 left, but never got the ball back.

“I was really proud of the guys stopping them on fourth down on the goal line. I think if you want to know if kids have heart, there you go," TCU coach Gary Patterson said. "Outside of that, we’ve got to tackle and can’t turn the ball over.”

The Longhorns (4-1, 2-0) have won their last three games since losing at former Southwest Conference rival Arkansas in Week 2. Texas will join the Razorbacks in the SEC no later than the 2025 season.

Sarkisian said an emphasis to the players is to play physically tough, and being mentally tough to deal with distractions and adversity.

“The beauty of it when you see it kind of unfold and then you see the response from the players in game, on the field, when they’re tired, when they’re hot, in the fourth quarter with 4½ minutes to go,” he said. “I think the point’s getting across.”

Zach Evans, who entered the game as the Big 12's top rusher just ahead of Robinson, had 113 yards with a 12-yard TD after JD Spielman's game-opening 87-yard kickoff return. Spielman later had an 11-yard TD catch.

Texas went ahead to stay when Robinson powered in from 4 yards out to make it 23-17 with four minutes left in the first half. That came on his 16th carry, when he had already reached 100 yards for the seventh time in his last nine games.

Robinson's zig-zagging 27-yard TD run between defenders in the first quarter gave Texas its first lead at 10-7. That capped a 99-yard drive extended when safety T.J. Carter was ejected for a targeting penalty, after a booth-initiated review, for his hit that knocked the ball out of the hands of intended receiver Jordan Whittington on third down from the Longhorns 7.

Patterson said the targeting “took the wind out of our sails a little bit.”

Texas: The Longhorns had 15 TDs on 17 drives in Thompson’s two starts, with the only drives they didn’t score after his two interceptions. Dicker made a career-high four field goals (38, 38, 26 and 28 yards) after not having an attempt since the first half at Arkansas. Whittington had a 32-yard TD catch.

TCU: Derius Davis had two fumbles in the first half, the receiver mishandling the back end of a double handoff and later muffing a punt inside the 10. Max Duggan fumbled after a blindside sack by Anthony Cook, who then recovered the fumble. Duggan, who had won his first two starts against Texas, finished 20-of-28 passing for 182 yards, and had 33 rushing yards on 16 carries.

Texas likely will be back in the Top 25 when the new poll comes out Sunday, after being the first team out last week. The Longhorns were the preseason No. 21, and were up to 15th before the 40-21 loss at then-unranked Arkansas.

Texas: The Longhorns will be about 40 miles east at the State Fair of Texas next Saturday for their annual Red River rivalry game against sixth-ranked Oklahoma.