Stanford excited to return home vs. UCLA after extended trip 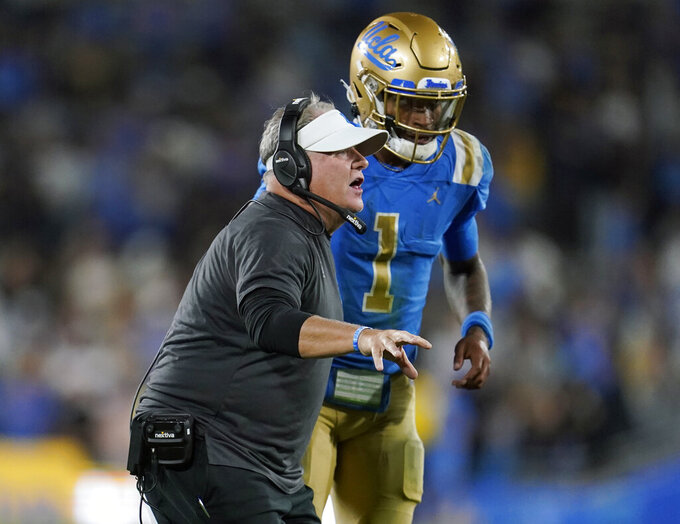 UCLA head coach Chip Kelly stands next to quarterback Dorian Thompson-Robinson during the second half of an NCAA college football game against Fresno State on Saturday, Sept. 18, 2021, in Pasadena, Calif. If anyone symbolizes the rollercoaster that has been UCLA football during the Chip Kelly era it is quarterback Dorian Thompson-Robinson. (AP Photo/Marcio Jose Sanchez)

STANFORD, Calif. (AP) — For the first time in about 10 months, a football weekend for Stanford will start with a relaxing night at a hotel near campus instead of a flight.

After finishing last season with four straight road games and starting this season with three more, the Cardinal are finally coming home when they host No. 24 UCLA on Saturday.

“I don’t know if our guys are going to know what to do on Friday afternoon,” coach David Shaw said. “Usually we’re going toward the airport. It’s good to be just going back toward the team hotel and being able to get some rest and recuperate and get off our legs and show up at Stanford Stadium.”

The Cardinal (2-1, 1-0 Pac-12) ended last season on a long road trip when COVID-19 protocols forced them to leave campus. The schedule then sent them out on the road to begin this season as they opened with a neutral site game in Texas against Kansas State followed by road games against Southern California and Vanderbilt.

No other Power 5 school opened with two straight games away from home much less the three that the Cardinal had before hosting the Bruins (2-1, 0-0).

Stanford ended up winning six of those seven games, winning all six true road contests and only losing to Kansas State.

Now they play their first home game since losing 35-32 to Colorado last Nov. 14 and will have fans in the stadium for the first time in 665 days since hosting Notre Dame in the 2019 regular season finale.

“The students are in town. The student section will be there. I think there’s some excitement building around this team,” Shaw said. “It will be great to get back in our stadium and go out there and hopefully play extremely well.”

The Bruins are looking to bounce back after losing 40-37 at home last week to Fresno State. UCLA had vaulted up to No. 13 in the poll after beating LSU 38-27 on Sept. 4 but remain one of the favorites in the Pac-12 South if they can regroup.

“I’d say very humbled,” quarterback Dorian Thompson-Robinson said about the outlook after the loss. “We haven’t been a top 15 team in a while and that’s gone now. So everybody got their hopes up and now we’re back to the realization of we got to put this work in and we can’t just be all talk and all that stuff. So I think it’s a very humbled team, we’re ready to go back to work and get back to the fundamentals and start this thing over again.”

The Cardinal got a big lift when Shaw made the decision to make quarterback Tanner McKee the starter before Week 2. McKee is 35 for 52 for 452 yards and four TDs in winning the past two weeks. He has also run for two touchdowns, with his six total TDs the most for a Stanford QB in his first two starts.

“There was a reason why he was a top five quarterback coming out of high school — size athleticism, strong arm, quick release, leadership, accuracy,” Shaw said. “He’s got all the tools. What we’re seeing now is him really getting a grasp of playing college football.”

The Bruins are last in the Pac-12 in pass defense, giving up 342.7 yards per game. Too often the secondary has been soft in coverage and allowed big plays.

Another concern going into the game is the absence of safety Quentin Lake, who was injured last week and has not practiced so far this week.

“He’s a leader, everybody looks up to him, having him out there, everybody loves it, but guys step up,” safety Stephan Blaylock said.

The Cardinal will be without three key running backs with starter Austin Jones and backups Casey Filkins and E.J. Smith all out with injuries. Nathaniel Peat will take over the starting role and has been productive this season. He had five carries for 51 yards and a touchdown last week at Vanderbilt and scored on an 87-yard TD run at USC the previous week.

“We've got some holes to fill. A couple of years ago, we were really thin, and injuries like that would have been really brutal for us,” Shaw said. “Right now, we have good depth, feel good about who we have."