Tennessee DL Emmit Gooden out for season with torn ACL 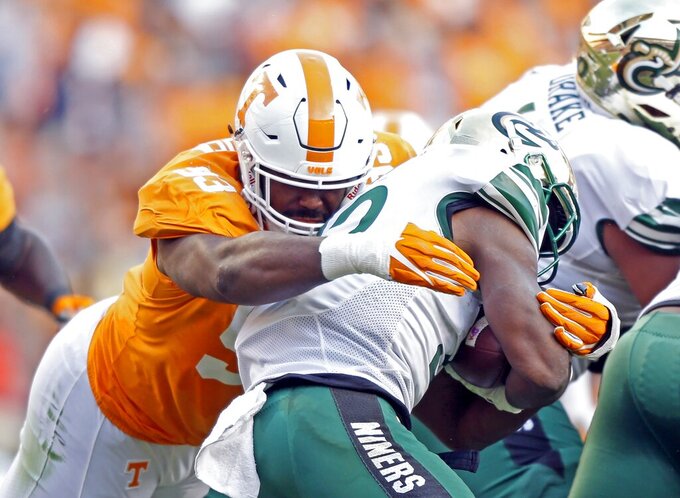 FILE - In this Nov. 3, 2018, file photo, Tennessee defensive lineman Emmit Gooden (93) tackles Charlotte running back Benny LeMay (32) during the first half of an NCAA college football game in Knoxville, Tenn. Gooden will miss the entire season with a knee injury, leaving the Volunteers without their most experienced player on a defensive line that has no returning starters. Vols coach Jeremy Pruitt says Gooden tore his anterior cruciate ligament Tuesday, Aug. 6, and will undergo surgery next week. (AP Photo/Wade Payne, File)

KNOXVILLE, Tenn. (AP) — Tennessee's Emmit Gooden will miss the entire season with a torn anterior cruciate ligament in his right knee, leaving the Volunteers without their most experienced player on a defensive line that has no returning starters.

"It's unfortunate for him and for our football team, but he's a guy that's got another year," Pruitt said. "He'll continue with going to school and get ready to come back next spring and next fall."

Gooden, a senior from Brownsville, Tennessee, made one start and appeared in all 12 games for Tennessee last year while making 33 tackles. The 2018 campaign marked Gooden's first year with Tennessee after he spent two seasons at Independence (Kansas) Community College, where his progress was detailed in the Netflix documentary series "Last Chance U."

His seven tackles for loss last year matched the second-highest total on the team, behind only outside linebacker Darrell Taylor's 11.

The defensive line shaped up as one of Tennessee's biggest concerns even before Gooden's injury.

Tennessee's regular starting linemen last season were Kyle Phillips, Shy Tuttle and Alexis Johnson, who all exhausted their eligibility. Gooden is the only Tennessee defensive lineman who has made any career starts for the Vols.

The only other defensive linemen on the roster who even made a tackle for Tennessee last season are Matthew Butler and John Mincey, who combined for 18 overall stops but only four solos.

"We've got 10 guys there right now working on the defensive line," Pruitt said. "There's not a whole lot of difference in any of them. Some of them have played in some games. Some of them haven't. They all have strengths and weaknesses, but most of them have very limited game experience."

Tennessee is still awaiting word on whether the NCAA will grant a waiver enabling defensive tackle Aubrey Solomon to play this season rather than sitting out a year following his transfer from Michigan. Solomon, a former five-star recruit, totaled 24 tackles over the last two seasons while filling a reserve role for Michigan.

The Vols boosted their depth on the defensive line by signing junior-college transfers Darel Middleton and Savion Williams in December. But they also could lose redshirt freshman Kurott Garland, who has entered the transfer portal.

Pruitt's staff now must spend the next few weeks hoping for good news on Solomon's waiver while trying to get the other defensive linemen ready for the Aug. 31 season opener with Georgia State.

"A lot of these guys show a lot of promise during the drills," Pruitt said. "When you get to 11-on-11, there's more things flying around, (we've) not had near the consistency that we need to have, and that will come with just more playing time, more practices. We've got to continue to put these guys in those situations, put them out there. That's why they came here - for the opportunity to play - and they'll get it."