Texas Tech, Iowa State meet amid Baylor memories for both 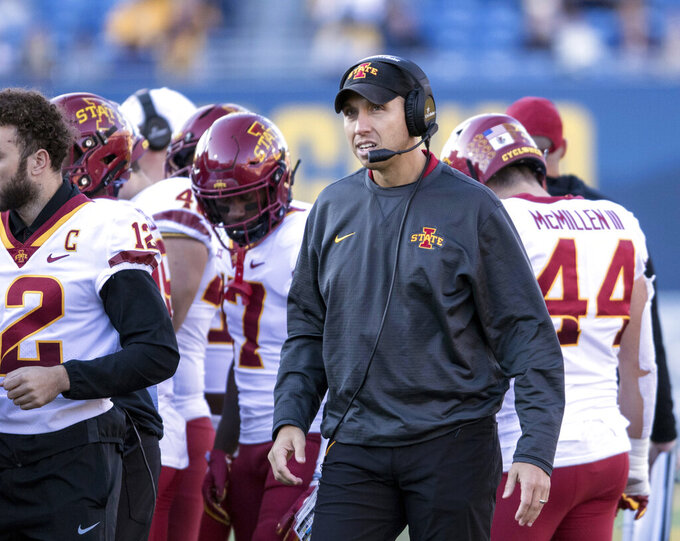 LUBBOCK, Texas (AP) — Though they would never admit it, Texas Tech coach Matt Wells and Iowa State's Matt Campbell might spend a moment thinking about Baylor when their teams meet Saturday.

For Wells, the memory is too fresh of a play that wasn't ruled a fumble by the Bears in overtime in the Red Raiders' loss in Waco last weekend. Athletic director Kirby Hocutt even got fined over it.

As for Campbell, the only other scheduled trip to Texas for the Cyclones this season was the game that got away — also in Waco. Iowa State lost 23-21 after trailing 20-0, rallying with three fourth-quarter touchdowns and then letting Baylor drive to a winning field goal.

Texas Tech (3-3, 1-2 Big 12) was coming off its biggest win in its first season under Wells against Oklahoma State and going into OT against the undefeated Bears. On the second play, Baylor center Jake Fruhmorgen snapped the ball off his buttocks. The Red Raiders recovered the loose ball, but officials ruled it was an illegal snap and a dead ball, allowing Baylor to keep possession. The Bears scored a touchdown and eventually won 33-30 in the second overtime.

Hocutt was fined $25,000 for issuing a statement the next day saying the Big 12 had acknowledged the call was incorrect and the Red Raiders should have had a chance to win with only a field goal in the first OT. Wells is moving on to other thoughts now.

"Huge challenge for us on the road against a Texas Tech team that was really talented a year ago," Campbell said.

Texas Tech quarterback Jett Duffey is looking more comfortable in his second straight season of filling in for Alan Bowman, out indefinitely with a shoulder injury. The redshirt junior has thrown for at least 350 yards in consecutive Big 12 games, the first to do that for the formerly pass-happy Red Raiders since Patrick Mahomes' final season in 2016.

The first three quarters against Baylor were rough for Iowa State's Brock Purdy. The five quarters since were some of the best of the sophomore quarterback's career. After going 10 of 13 for 127 yards and two touchdowns to lead the rally in Waco, he was 19 of 24 for two scores and ran for 102 yards and two more TDs against the Horned Frogs.

PICK OF THE LITTER

RUN AWAY, RUN AWAY

Running back Breece Hall was the first Iowa State freshman to rush for three touchdowns while going for a career-high 132 yards against West Virginia. He's one of four FBS freshmen with at least three rushing TDs in a game this season.

"I thought he had great vision," Campbell said. "I thought he did a great job of sticking his foot in the ground and being vertical."

Iowa State linebacker Marcel Spears has been the Big 12 defensive player of the week each of the past two seasons after playing Texas Tech. He has three interceptions, two returned for touchdowns. ... Texas Tech has lost three straight games to Iowa State, its longest skid in the series. ... Iowa State, Oklahoma and Washington are the only Power 5 schools without a loss of more than 14 points over the past three seasons. The Cyclones' past three losses have been by a combined five points. ... Texas Tech redshirt freshman running back SaRodorick Thompson had a career-high 153 yards and two touchdowns against Baylor and leads the Red Raiders with 412 yards and five scores.