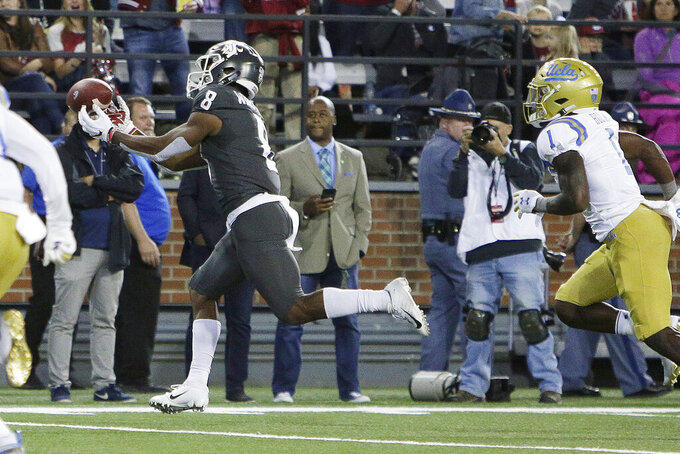 Washington State wide receiver Easop Winston Jr. (8) catches a pass which he runs for a touchdown in front of UCLA defensive back Darnay Holmes (1) during the first half of an NCAA college football game in Pullman, Wash., Saturday, Sept. 21, 2019. (AP Photo/Young Kwak)

PULLMAN, Wash. (AP) — Coach Chip Kelly says he never lost faith in his UCLA team, even as it was losing its first three games.

Kelly said the Bruins played hard all 12 quarters of those losses, and that paid dividends when they fell behind at No. 19 Washington State on Saturday night.

Dorian Thompson-Robinson threw a 15-yard touchdown pass to Demetric Felton with 1:07 left in the game as UCLA overcame a 32-point second-half deficit to claim a wild 67-63 victory over the Cougars.

"I always thought we were a good football team," Kelly said. "If we could be consistent."

"When you are battle-tested like our guys are, I think that showed up today."

After Felton's TD, Gordon was sacked and fumbled — the team's sixth turnover of the game — on the next possession with about a minute remaining and UCLA recovered and ran out the clock.

Gordon threw for 570 yards and broke the school record with nine TD passes for Washington State (3-1, 0-1). Jacksonville Jaguars' starting QB Gardner Minshew, a sixth round draft pick who was on the WSU sidelines for Saturday's game, held the school record of seven TD passes in a game, set in November 2018 against Arizona.

Washington State jumped to a 35-17 lead at halftime, and pushed that to 49-17 early in the third quarter.

But UCLA, which had failed to score more than 14 points in each of its three losses, stormed back, erupting for three touchdowns in the final 4 minutes of the third. That was part of a run of seven touchdowns in eight possessions, many fueled by WSU turnovers.

Thompson-Robinson ran for one touchdown and threw scoring passes to Chase Cota and Felton to bring the Bruins within 49-38.

In the fourth, Thompson-Robinson hit Devin Asiasi with a 7-yard touchdown pass and then found Cota for a two-point conversion pass to bring UCLA within 49-46 with 14:28 left in the game.

Washington State was forced to punt and Kyle Philips returned it 69 yards for a touchdown, putting the Bruins ahead 60-56 with 7:31 left.

That set the stage for the winning touchdown.

"The football is a really odd-shaped ball and it bounces different ways sometimes," Kelly said. "Fortunately for us, it bounced our way tonight."

"That's great but that doesn't mean we kick up our feet and stop working," Kelly said.

"We kept shooting ourselves in the foot," Gordon said. "It's hard to win any sort of football game when you turn the ball over six times."

"I thought they did a good job of attacking the ball," Washington State coach Mike Leach said of UCLA. "I thought we had lousy ball security."

Leach said his team lost its edge in the second half.

"Our guys got frantic and panicked," Leach said.

"We collapsed in every phase of the game."

On the first series of the game, UCLA linebacker Josh Woods intercepted a Gordon pass. Thompson-Robinson hit Joshua Kelley on a 14-yard touchdown pass for a 7-0 lead.

Gordon replied by finding Winston with a 4-yard touchdown pass.

The Bruins replied with a 31-yard field goal by JJ Molson for a 10-7 lead.

Gordon found Travell Harris for a 10-yard touchdown pass and a 21-10 lead.

Felton returned the ensuing kickoff 100 yards for a touchdown as the Bruins pulled within 21-17.

Gordon replied with short touchdown passes to Winston and Tay Martin for a 35-17 lead that stood at halftime.

In the third, Gordon hit Renard Bell and Dezmon Patmon for touchdowns and a 49-17 lead.

UCLA had 657 yards of total offense, to 720 yards for Washington State.

Demetric Felton caught seven passes for 150 yards and two touchdowns for UCLA. "Demetric Felton is a special player. He is continuing to grow," Kelly said.

UCLA: The Bruins came in as the only Pac-12 team averaging less than 300 yards of offense per game (263), but finally put some points on the scoreboard.

Washington State: The Cougars could not stop the Bruins in the second half and were hurt with six turnovers that led to 29 points.

Washington State will likely drop in the poll.

UCLA plays at Arizona next Saturday

Washington State has a showdown next Saturday at No. 10 Utah.