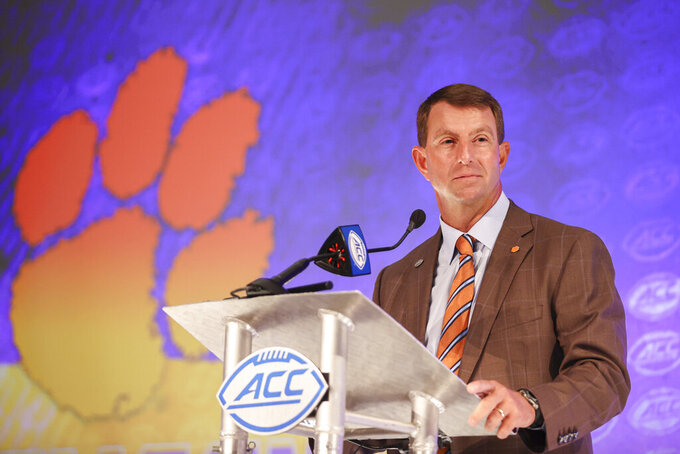 The Tigers were picked on 125 of 147 votes from media members attending the ACC Kickoff preseason media days last week. They were selected on all but one ballot to win the Atlantic Division race.

Dabo Swinney's Tigers last year became the first team in any power conference to win six straight league football championship games. And their current streak of ACC championships is the league’s longest since Bobby Bowden’s Florida State teams won at least a share of the crown for nine straight seasons after joining the league in 1992.

North Carolina waschosen to win the Coastal Division and earned 16 votes to win the league title, marking the first time the Tar Heels were named to win the division since 2016 after claiming the 2015 Coastal title.

In the Coastal, Miami was second behind UNC, followed by Virginia Tech, Pittsburgh, Virginia, Georgia Tech and Duke. While Clemson has been a fixture atop the Atlantic, the Coastal has been unpredictable, with each of the seven schools winning a crown from 2013 to 2019 before the league played a nondivisional format in 2020 because of the pandemic.