Without Bielema, Illini out to end No. 18 Iowa's dominance 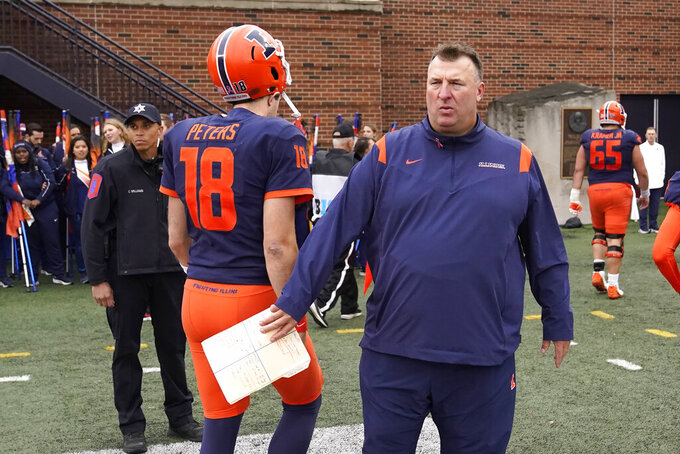 FILE - Illinois head coach Bret Bielema, right, watches his players walk off the field including quarterback Brandon Peters (18) after the team's 20-14 loss to Rutgers in an NCAA college football game Saturday, Oct. 30, 2021, in Champaign, Ill. (Bielema has tested positive for COVID-19 and will miss his team's game at No. 18 Iowa on Saturday. Bielema said Tuesday, Nov. 16, 2021, he was tested for the virus Monday night after developing mild symptoms during the day.AP Photo/Charles Rex Arbogast, File)

IOWA CITY, Iowa (AP) — The Iowa-Illinois football rivalry is nothing like it was decades ago.

The 18th-ranked Hawkeyes head into Saturday's home game on a seven-game win streak in the series. Illinois’ last win came in 2008, and the teams didn’t play again until 2014 when they were put together in the Big Ten West Division.

Illinois is in its first season under Bret Bielema, a nose guard for Iowa when the rivalry was at its pinnacle in the early 1990s. He also was on the Iowa coaching staff from 1994-2001.

Bielema made sure to stress this week that this game shouldn't be about him; he has since tested positive for COVID-19, and he won't be at the game. Assistant head coach George McDonald will run the team in Bielema’s absence.

“It’s been pointed out to me that we’ve lost seven straight,” Bielema said. “I don’t need to throw that in our players’ face; they’ve actually said it to me. I know what it means to these players, and it’s about everything other than the fact about me. I’m just the newest equation into this thing. It’s a nice little side piece. But it’s nothing what this story’s about.”

Iowa coach Kirk Ferentz said Bielema has proved he knows how to win in the Big Ten. Bielema went 68-24 in seven seasons at Wisconsin, including 3-2 against the Hawkeyes.

Iowa (8-2, 5-2 Big Ten) is tied for the division lead with Wisconsin, although the Badgers hold the tiebreaker because of the 27-7 win over the Hawkeyes on Oct. 30. Illinois (4-6, 3-4), which has road wins over ranked teams Penn State and Minnesota, needs to win Saturday and at home against Northwestern on Nov. 27 to be bowl-eligible.

Bielema wasn’t interested in that discussion this week, or the emotions surrounding what was going to be his return to Iowa City.

Walters’ base salary increases to $1.05 million in 2022 with $100,000 raises each of the following two seasons. He will also be eligible for annual retention incentives of at least $250,000 per season.

Ferentz was asked Tuesday what the plan would be if he, like Bielema, would have to miss a game because of illness.

Ferentz, who tested positive for COVID-19 at the end of last season, didn't outline what would happen if he were absent, but he said he's confident his staff would manage the team well.

“I’m a junior,” Linderbaum said when asked why.

That's true from an eligibility standpoint. He took a redshirt season in 2018 before starting every game the last three years.

Linderbaum is considered one of the top offensive line prospects for the NFL draft next spring and could be playing his last home game.

“That’s something I’ll think about after the season is over,” Linderbaum said.

“They’re doing a really good job running the football,” Ferentz said. “It’s clear they want to do that. It’s a point of emphasis. I think they’ve got a really good offensive line and good backs."