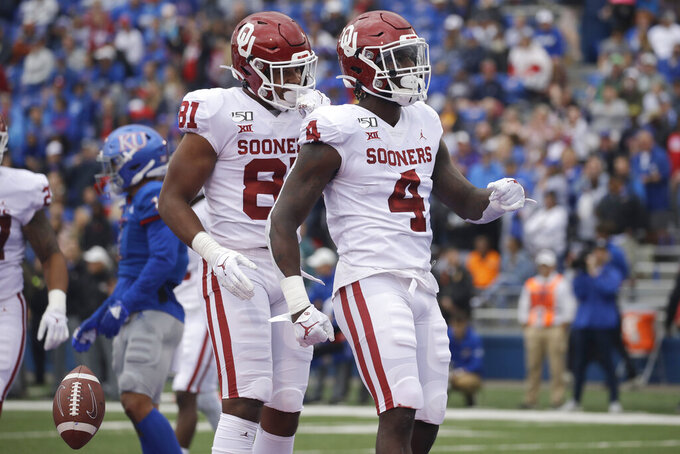 Oklahoma running back Trey Sermon (4) celebrates in the end zone after scoring a touchdown during the first half of an NCAA college football game against Kansas, Saturday, Oct. 5, 2019, in Lawrence, Kan. (AP Photo/Charlie Riedel)

After six regular-season Associated Press college football polls the top six teams are the same teams that were ranked in the top six in the preseason. The order has changed, but at no point have the teams. Since the preseason poll started in 1950, the top six spots have never gone this long being held by the same group of teams.

Some historical background. The season starts earlier now than it did decades ago. In the 1980s, the sixth regular-season poll would typically come out around mid-October. Go back to the 1960s or farther and the sixth poll of the season would come out in late October or early November. But typically, throughout the years, six polls meant most teams had played from four to six games.

This season started with Clemson at No. 1, followed by Alabama, Georgia, Oklahoma, Ohio State and LSU. Now Alabama is No. 1 and Clemson is No. 2.

When the sixth regular-season AP Top 25 presented by Regions Bank came out Sunday the big change was Ohio State moving into a tie with Georgia for No. 3. LSU is No. 5 and Oklahoma is sixth.

The lack of movement is at least in part due to chance and scheduling. Most of the toughest opponents for all of those teams are still ahead. Oklahoma gets No. 11 Texas this week, and LSU hosts No. 7 Florida.

But don't underestimate just how dominant the Super Six have been. Their average margin of victory is 32 points per game, led by Ohio State at 40.5. Only one of the Buckeyes opponents is ranked this week (No. 25 Cincinnati), but they have combined for a 20-12 record. They have made some pretty good teams look helpless.

So if you have been thinking: Boy, it seems like we're talking about the same teams every week this college football season; your perception is reality.

Reality check: This trip to A&M is the only realistic shot the Tide has of being truly tested until November. 'Bama's other October opponents are Tennessee and Arkansas.

Ranked: Too high, but it's hard to complain about anybody voting Alabama No. 1.

Reality check: One area the Bulldogs would probably like to get cranked up: Georgia ranks 78th in the country in pass plays of 20 yards or more with 16.

Reality check: The Buckeyes might have the best defense in the country, which makes them far less susceptible to the type of unexpected loss to an unranked team that kept them out of the playoff the last two seasons.

Ranked: Ten AP voters have the Buckeyes No. 1 this week. Too low.

Reality check: The best cornerback in the country just might be LSU freshman Derek Stingley.

Reality check: Can a team with an elite defense, but just a pretty good offense crack the Super Six? The Gators hope so.

Reality check: The Badgers profile is similar to the Super Six — average margin of victory, 37.6 — but so much of the damage has come against three very bad teams.

Next: vs. Southern California.

Reality check: RB Tony Jones has done a nice job as the lead back for the Irish with 381 yards rushing and four touchdowns, but the return of Jafar Armstrong from injury is huge with the schedule about to get more challenging.

Reality check: Time to find out what the Nittany Lions are really about. The next three weeks: at Iowa, Michigan and at Michigan State.

Reality check: Devin Duvernay is ultimate go-to receiver. He has a team-high 45 catches. The next best four players on the team have a total of 49.

Reality check: The Tigers play three members of the Super Six. They're probably not good enough to beat all of them, but here's betting they get at least one.

Next: vs. Colorado, Friday.

Reality check: The nasty Ducks' defense has feasted on some backup quarterbacks.

Reality check: The Broncos are doing that thing where a team rises in the rankings mostly because the teams around it lose.

Next: at Oregon State.

Reality check: In a conference where the champion is likely to be the team that self-destructs the least, you have to like Utah's chances.

Reality check: No, there are not a lot of great alternatives, but the voters have given the Wolverines far more slack than they deserve.

Reality check: ASU is one of six Pac-12 teams that have been in and out of the rankings so far this season.

Ranked: Feels too high, but probably too low.

Next: at Miami, Friday.

Reality check: The Cavaliers look like the only truly competent team in the ACC Coastal and they don't play Clemson.

Reality check: The AAC West is setting up for quite a race with the Mustangs, Memphis, Tulane and Navy all off to good starts. Don't count Houston out either.

Reality check: What's behind Baylor's strong start: The Bears ranked 86th in the nation in defense last year (6.49 yards per play). They rank 26th this year at 4.49.

Reality check: The Tigers have another stud running back in redshirt freshman Kenneth Gainwell, who is averaging 124 yards per game and 8.16 per carry.

Reality check: The Aggies will face the No. 1 team in the AP poll for the second time this season. A chance to grab another quality loss.

Reality check: Being the first AAC team to beat UCF in almost two years is worth a ranking.

Instead of Texas A&M how about Missouri or maybe Appalachian State?