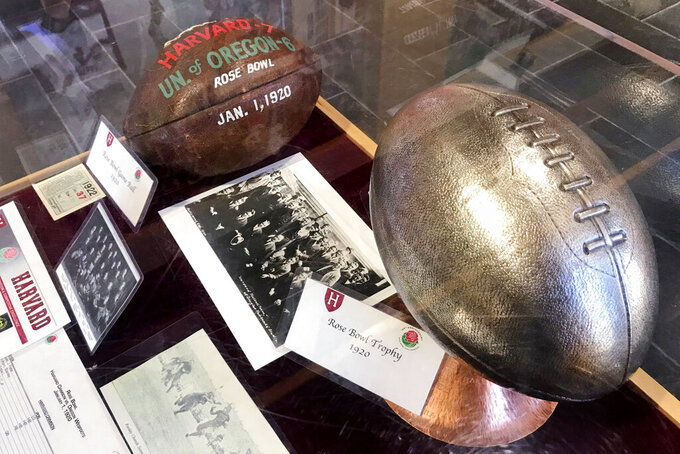 A selection memorabilia from the 1920 Harvard University football season, including a dated leather football, a team photo and trophy, are displayed at the school's athletic complex in Cambridge, Mass., Friday Nov. 1, 2019. Harvard's 7-6 victory over Oregon in the Jan. 1, 1920, Tournament East-West Football Game, a precursor to the Rose Bowl, was the only postseason appearance in the Ivy League school's century and a half of football. (AP Photo/Jimmy Golen)

One hundred years ago, college football was still dominated by leather helmet-wearing Ivy Leaguers who played both offense and defense. The forward pass had been legalized about a dozen years earlier, but the outcomes were still largely decided by the running and kicking games.

It was in this environment that the Pasadena, California, Tournament of Roses decided to invite the top teams from the East and West to play in a game that was not yet called the Rose Bowl. Although the first one was held in 1902, Michigan's 49-0 victory over Stanford convinced organizers to shelve the plan until 1916.

Since then, the game has been played every year. During World War I, teams from military bases were brought in. When college football returned in earnest for the 1919 season, once-tied Harvard emerged as the top team in the East, with unbeaten Oregon coming out of the West.

In the sixth Tournament East-West Football Game, on Jan. 1, 1920, Fred Church scored the game's only touchdown on a 13-yard run in the second quarter. Oregon made it a one-point game before the half, then missed three drop-kick field goal attempts in the second.

Here is part of the story that The Associated Press sent its member newspapers, as printed the following day in The (Spokane, Wash.) Spokesman-Review:

TOURNAMENT PARK, PASADENA, Cal., Jan. 1 — Harvard's football team, coming out of the east to defend their athletic supremacy against Oregon of the west, held its laurels today by a narrow margin, winning the game featured by the tournament of roses, seven to six. Harvard's points were gamed on a touchdown by Church and a clean goal from touchdown by A. Horween, while Oregon's points game from goals from the field by Steers and Manerud.

From a standpoint of clean spot, sustained interest and thrilling moments, the game topped those of previous years, being replete with interest. The play of the opposition was so evenly matched that not until the last minutes of the final period was the result at all certain and Oregon kept fighting until the whistle blew. Had the men not done so they would have lost by a one-sided score, as the ball, in Harvard's possession, was within a few inches of their defended goal until the last instant of play, when the westerners regained it on downs with less than a foot of the field between them and disaster.

Steers, Jacobberger, Huntington and Manerud were the stars for Oregon, and the support rendered by teammates was of the best. Steers punted and bucked the line in a manner that made him the favorite of Oregon supporters. When he was forced out by injury and Manerud went in, the latter ran like a demon, punted in remarkable style, considering his small size and weight, and bucked the line so strongly that he hurtled through time after time.

For Harvard, the Horweens were particular stars, while Eddie Casey, their teammate back of the line, worked hard and successfully. There was no development of any particular style of play, the forward pass, punting, line formations, a few trick plays and all usual tactics being used.

Harvard's victory was probably due as much to superior teamwork, based on experience gained on eastern fields, as to any single factor. Weight seemed to have little to do with it, judging from the way their opponents held their line smashes. Speed was equally divided, the backs of the opposing teams seeming to get over the ground with equal facility. In interference and blocking the easterners had a shade of the best of it, according to press experts, but the teams were so evenly matched that there was little choice in any particular. In fact, if Manerud had been a trifle more successful in his effort to kick a goal from the field in the last period, the top figures of the score might easily have gone to the westerners.

The greatest crowd ever assembled at Tournament park was gathered for the event. The park seated more than 30,000 people, and general admissions for standing room only ran up the attendance to approximately 35,000, according to officials. The day was perfect, a slight haze overcasting the sun, not sufficiently to obscure the view from any seat.

When the Harvard team appeared the men were greeted by a yell from the throats of many thousand spectators, waiting to see the greatest event of the southern California year of sports.

Every one of the 30,069 seats on the field was sold far in advance of the hour of the game and when the tournament of roses parade ended shortly after noon the crowds began streaming through the gates and soon the lemon and yellow of Oregon were conspicuous in the east stands, while the colors of Harvard were massed across the way.

The sun, obscured all morning by a soft haze that had kept the temperature down, began to show through just as the teams ran out, but the morning had been so cool that the day was considered "Harvard weather" rather than Oregon weather. The field, green turf lined freshly with white, was in the best possible shape.

Elks and Vets in Bands.

Two bands, massed in the corners of the bleachers, entertained the crowd during the hour of waiting. One band was composed of ex-service men, all clad in the khaki of their war experience, while the other, an organization maintained by the Elks of Pasadena, was garbed in white.

Harvard took the field at 1:51 and started passing the ball in a little light practice.

Fifteen marathon runners, participants in a modified marathon staged by the Los Angeles Express and a Pasadena paper, finished under the south goal, after running the length of the field. They came in well grouped, with an interval of less than three minutes between the winner and the last man.

Then an airplane soared over the field and dropped a couple of small parachutes adorned with the colors of the opposing teams.