Board recommends Durkin to return as Maryland football coach 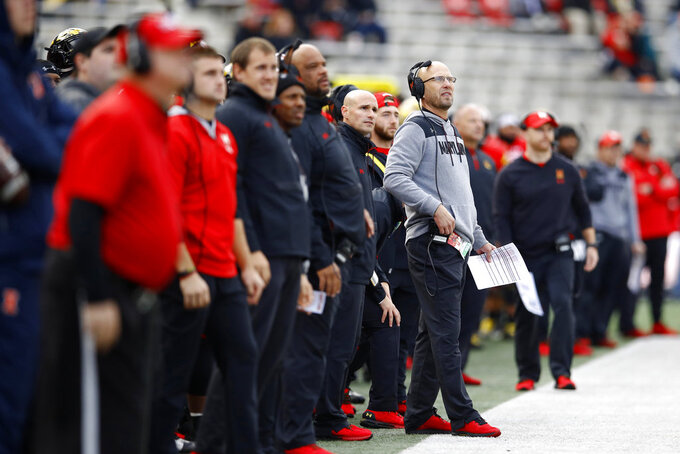 Maryland interim head coach Matt Canada, at right in gray, stands on the sideline in the first half of an NCAA college football game against Illinois, Saturday, Oct. 27, 2018, in College Park, Md. (AP Photo/Patrick Semansky)

BALTIMORE (AP) — DJ Durkin is poised to return as head of a splintered Maryland football program, coming back to the sideline following multiple investigations involving the death of a player and bullying by the coaching staff.

Not everyone is happy about the University System of Maryland board of regents recommendation Tuesday that Durkin, who has been on paid administrative leave since Aug. 11, should retain his job, along with the university president and athletic director.

The decision not only opens the door for Durkin to return to the team as soon as this week, but raises questions on and off the field.

Durkin was placed on administrative leave after offensive lineman Jordan McNair collapsed during practice, which spawned an investigation into the potential dangerous culture of the football program.

In a statement issued by the University, Durkin said he was "grateful for the opportunity to rejoin the team" and appreciated the support of the board of regents.

The attorney for McNair's parents in August called for Durkin to be fired , and reiterated that assertion during a news conference that started a couple of hours after the board's announcement.

Hassan Murphy, of Murphy, Falcon & Murphy, said the decision to retain Durkin was "callous and indefensible," and could be a part of future legal actions.

McNair's father, Marty McNair, said, "I feel like I've been punched in the stomach and someone spit in my face."

Outgoing Maryland President Wallace Loh had apologized to McNair's family after his death, saying the university didn't do what it needed to protect their son.

The recommendation by the board of regents comes after the release of 198-page external report , which found that program was not toxic but had problems because many players feared speaking out.

The investigation cited Loh and athletic director Damon Evans as having a part in the troubled program, but Brady said the board recommended both men be retained, along with Durkin.

"We are not saying people didn't make mistakes. They each made mistakes and have acknowledged those shortcomings," Brady said. "We are saying that, despite those mistakes, our judgment is that these individuals are best-placed to immediately carry out the reforms necessary to safeguard the wellbeing of student-athletes and help them be successful as individuals and as a team."

With the conclusion of multiple investigations into the program, the coach, AD and school university president are all keeping their jobs. But strength and conditioning coach Rick Court resigned in August, and two members of the athletic training staff remain on administrative leave.

"We believe that (Durkin) is a good man and a good coach who is devoted to the wellbeing of the student athletes under his charge," Brady said. "He is also at the beginning of his coaching career, with a great deal of promise and much still to learn. We believe he deserves the opportunity."

Loh on Tuesday announced his intention to retire in June 2019. And comparing the football program to a ship in a storm, Loh said he would "navigate that ship to calmer waters" before stepping down.

The university president said it's up to Evans whether Durkin, who signed a five-year contract with Maryland in December 2015, is on sideline Saturday against visiting Michigan State.

Durkin's return to the sidelines could disrupt the team's chemistry.

Junior offensive lineman Ellis McKennie said on Twitter "very Saturday my teammates and I have to kneel before the memorial of our fallen teammate. Yet a group of people do not have the courage to hold anyone accountable for his death. If only they could have the courage that Jordan had. It's never the wrong time to do what's right."

The Terrapins seem to have bonded together under the leadership of offensive coordinator Matt Canada, who has been serving as interim head coach during Durkin's absence. Maryland is 5-3 heading into its matchup with the Spartans.

Hours before the news conference, Canada held his weekly session with the media in College Park.

Canada, who's never been a college head coach, said the players have handled as well as anyone could have expected.

"They're awesome," Canada said. "They deserve a tremendous amount of credit for playing hard. This is really the loss of their teammate, the loss of Jordan. For a bunch of young guys, they've learned how to mourn. The way this has transpired, we as a staff, as a program, couldn't be more proud of our players."

Evans said in August that an investigation revealed that the 19-year-old McNair "did not receive appropriate medical care, and mistakes were made by some of our athletic training personnel."

An external investigation released on Sept. 21 confirmed the medical staff on the scene did not act properly in the treatment of McNair at the scene. The 74-page report stated that more than an hour passed between when McNair began experiencing symptoms of heatstroke and when school officials called 911 to report a medical emergency.

"They entrusted their son to us, and he did not return home," Loh said.

In the wake of the death of the 6-foot-4, 325-pound McNair, an ESPN story reported that the Maryland coaching staff engaged in physical and mental abuse of the players.

That led to an investigation of the culture of the program overseen by the board of regents. The board selected an eight-person commission to handle the probe.