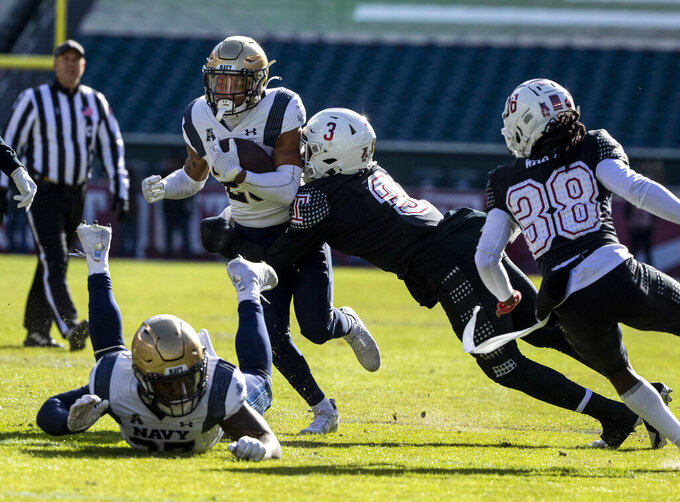 EAST RUTHERFORD, N.J. (AP) — The Cadets and Midshipmen who play in Saturday’s Army-Navy game were no more than toddlers during the Sept. 11, 2001, terrorist attacks.

Still, they understand the significance of remembering that day when they meet this weekend at MetLife Stadium in the 122nd renewal of one of college football’s biggest rivalries.

“It is awesome to be here to honor those firemen and policemen and people that were there," Navy senior linebacker Diego Fagot said. "To play in such an environment at MetLife, it’s so very humbling and I am honored to be a part of it.”

Army (8-3) has put together a run in the series since Jeff Monken took over as coach in 2014 and started to rebuild a program that ended up losing 14 in a row to Navy. The Black Knights have won four of the last five, including a 15-0 win last year when the game was played at West Point because of the COVID-19 pandemic.

Most of the games have been close.

Monken was an assistant at Navy under Paul Johnson from 2002-07. He said returning to the game in '14 was an experience.

“You walk out and there’s just this feeling like ‘This is it,’” said Monken, who is headed to the Armed Forces Bowl with the Black Knights to face Missouri on Dec. 22.

Beating Navy is the only goal this week. Losing?

This will be the final game of the season for Navy (3-8). Ken Niumatalolo's team is facing its 11th bowl-bound team, a group that includes Cincinnati and Notre Dame.

“This will be the legacy we will leave with the program,” Navy senior Chance Warren said.

Fagot, playing in his fourth Army-Navy game, said the one feeling he has always had is that everyone in the country is rooting for the game.

“I don’t know if it is specific to Army or Navy but they are watching the game, they are encouraging and it’s very patriotic,” he said. “You can definitely feel the love and the honor for that game. Ultimately we play on the gridiron and then we serve with each other, so it is special.”

Two blue-chip linebackers who excel at disrupting offenses take center stage. Fagot leads the Midshipmen with 85 tackles, including 11 tackles for loss. Army junior Andre Carter II leads the nation in sacks per game (1.32) and is second overall with 14 1/2. Fagot stands 6-foot-3 and weighs 240 pounds; Carter is 6-7 and weighs 250. Fagot had five tackles in last year's game at Michie Stadium. Carter, who had two starts in his first year playing, had one tackle.

Army fullback Jakobi Buchanan is fourth on the team in rushing with 412 yards. He is averaging 3.9 yards, the lowest average among the top nine backs listed in the team stats.

But at 5-foot-9 and 260 pounds, Buchanan leads the Black Knights with 11 touchdowns. He also has 233 consecutive carries without losing yards. That’s why the ball was in his hands last December on a fourth-and-goal play from the 1 against Air Force with just over a minute left, and he delivered, giving the Black Knights a 10-7 victory and the Commander-in-Chief’s Trophy.

Army will wear uniforms that recognize the soldiers of the U.S. Army Special Forces that got the war started against the Taliban following the 9/11 attacks. The helmet has a light camouflage design.

President Joe Biden was not expected to attend the game, but the White House reiterated his strong support for the U.S. military.

“The President is so proud to be the Commander-in-Chief of such an incredible group of warriors,” White House principal deputy press secretary Karine Jean-Pierre said.