Diaz excited to return to defensive roots at Penn State 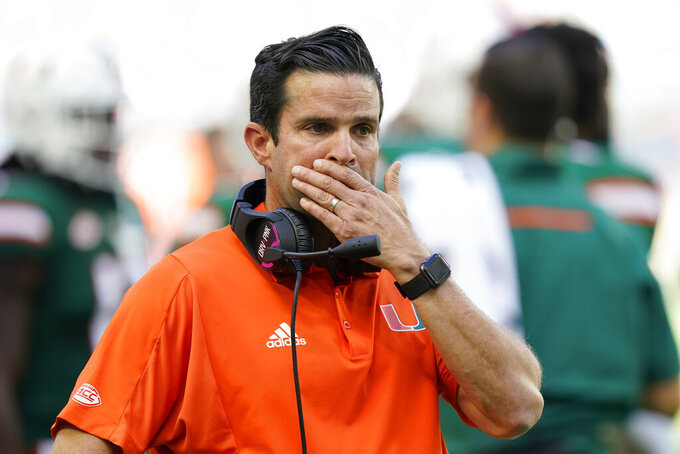 FILE - Miami head coach Manny Diaz looks on as officials review a play during the first half of an NCAA college football game against Georgia Tech, Saturday, Nov. 6, 2021, in Miami Gardens, Fla. Manny Diaz was fired as Miami’s football coach Monday, Dec. 6, 2021, after a 7-5 regular season and with the school in deep negotiations to bring Oregon coach Mario Cristobal back to his alma mater to take over. (AP Photo/Wilfredo Lee, File)

Fired on Dec. 6 after going 21-15 in three years with Miami, Diaz is already three practices into his new gig as Penn State’s defensive coordinator.

While Diaz is on board as an observer for now, being around his new team has helped ease the sting of losing his first head coaching job.

Hurt feelings have turned into excitement quickly as Diaz is looking forward to returning to his roots, closely mentoring linebackers and scheming against offenses.

Especially for a program known as Linebacker U.

“In terms of being a head coach moving forward, that’s the last thing on my mind right now,” Diaz said. “There are some things about it that I’ll miss and there are some things about it that I certainly won’t miss. What I’m really excited about is coaching defensive football at Penn State University. That’s fun to say out loud and that’s really where all my focus is right now.”

Penn State found out Friday it would be without maybe its best linebacker in the Outback Bowl. Brandon Smith posted on Twitter that he skipping his senior season to enter the NFL draft and opting out of the game against Arkansas.

Diaz got his start on the defensive side as a position coach before ascending to defensive coordinator for Middle Tennessee State in 2006. Diaz also coordinated defenses for Mississippi State, Texas, Louisiana Tech and Miami before the Hurricanes made him head coach in 2019.

After early evaluations of Penn State’s recent body of work, Diaz sees similarities in what Pry did the last few seasons and what the Hurricanes did from 2016-2018 when Diaz called the defense.

Those Hurricane units were similar to the 4-2-5 and 4-3 hybrid base looks that Penn State uses, and they never allowed more than 21 points per game.

They also liked to play a heavy-handed style with attacking linebackers and blitzing safeties, something Penn State players have prided themselves on the last few seasons.

Linebacker/defensive end Jesse Luketa has been intrigued by early conversations with Diaz.

“I enjoy picking his brain,” Luketa said. “Having him here is going to be extremely valuable to myself and this defense. It’s a good feeling like that to have a good defensive mind in the room.”

The Penn State defense dealt with a handful of injuries, including a season-ender to defensive tackle P.J. Mustipher midway through the year, and still ranked seventh in the country in scoring, allowing 16.8 points per game.

“I can see why they were successful,” Diaz said. “Beyond Brent, who is a big-time coach, ultimately what it comes down to is the players. That’s why you want to coach defense at a school where you can attract top defensive recruits.”

Diaz has an early start in that realm, too.

He was in the team’s war room on Wednesday welcoming recruits as they faxed in their National Letters of Intent.

“Normally when you take a new job, you don’t get to see those things until spring practice,” Diaz said. “So, to get an opportunity to get in here in December and really get a feel for the culture of the program, it’s been a very unique situation and I’m glad it happened this way.”