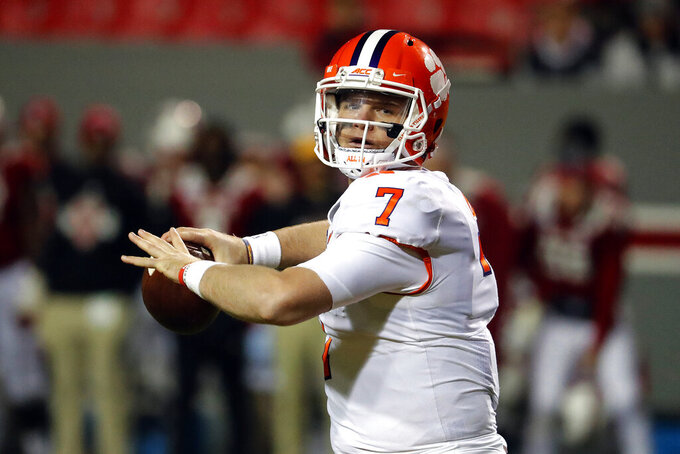 FILE - In this Saturday, Nov. 9, 2019, file photo, Clemson's Chase Brice (7) passes the ball against North Carolina State during the second half of an NCAA college football game in Raleigh, N.C. Brice, who backed up Trevor Lawrence at Clemson the last two seasons, has graduated from Clemson and now heads to Durham to start graduate school at Duke with two seasons of college eligibility remaining. (AP Photo/Karl B DeBlaker, File)

Brice is a graduate transfer who spent the past two seasons as Trevor Lawrence’s backup with the Tigers. He was battling redshirt junior Chris Katrenick and redshirt sophomore Gunnar Holmberg for the starting job in preseason camp before the school announced Sunday night that Brice had won that position battle.

“As he got more comfortable with our system, what you started seeing was his experience,” Cutcliffe said Monday. “He’s played a lot more football at this level than the other two have. … And you could see that in pocket movement and just feeling natural in a pocket.”

Brice is best known for rallying Clemson from a fourth-quarter deficit at home to beat Syracuse in 2018 after Lawrence left with a first-half injury. The Tigers went on to complete an unbeaten season and win the national championship.

Cutcliffe said Katrenick and Holmberg would share No. 2 duties behind Brice, saying the call on who would relieve Brice if needed would depend on the game circumstances.