Ga Tech aims to send Johnson out as winner against Minnesota 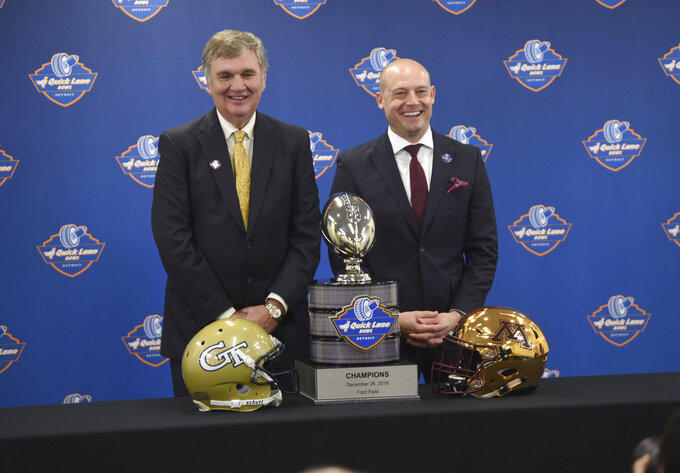 FILE - In this Dec. 5, 2018 file photo Georgia Tech head coach Paul Johnson, left, and University of Minnesota head coach P.J. Fleck pose with the NCAA college football Quick Lane Bowl trophy at a news conference in Allen Park, Mich. Johnson will lead Georgia Tech for the final time Wednesday, Dec. 26, 2018 against Minnesota in the Quick Lane Bowl. Johnson is 82-59 at Georgia Tech over 11 seasons and 128-88 overall, including six seasons at Navy. Minnesota has a nation-high 52 percent of its roster filled by freshman. The young became bowl eligible by beating Purdue 41-10 and Wisconsin 37-15 in November. (Max Ortiz/Detroit News via AP)

First things first, though: The 61-year-old coach will lead Georgia Tech for the final time Wednesday against Minnesota in the Quick Lane Bowl.

"This is my 40th straight year of coaching without a break, and it's probably time for a break," Johnson said. "That's kind of unheard of in this profession. Usually they take you out before then, or at least you have a break somewhere along the line. So, I'll take a break and re-evaluate, and who knows? If it's the last game, it's the last game. If I decide I can't live without it, I may come back. Right now, I just don't know."

Johnson does know what he's going to do with some of his free time: He will be a proud father as daughter Kaitlyn performs opera.

Minnesota has a nation-high 52 percent of its roster filled by freshmen.

"You'll see close to eight freshmen starting on offense, maybe as much as five or six on defense," Golden Gophers coach P.J. Fleck said. "But that's what we said at the beginning of the year would happen. It's been fun to watch this team mature, end the year winning two out of three."

The Golden Gophers (6-6) became bowl eligible with two wins over quality opponents. They beat Purdue 41-10 and won at Wisconsin 37-15 in November, knocking off the Badgers for the first time in 15 years and for the first time on the road since 1994.

Georgia Tech throws fewer than 10 times per game on average and defenses still can't slow down its triple-option, which has helped the team lead the nation with 335 yards rushing per game.

"Playing Georgia Tech, especially on defense, is a major challenge," Fleck said. "Not only just because of the players they have and the coaching they have, but the system and the style is different. You change a little bit of your defensive system to be able to stop the triple-option and to be able to stop that type of scheme."

Minnesota, meanwhile, has a spread-style offense that gives quarterback Tanner Morgan a steady dose of run-pass options at the line and read-option running plays. When Morgan has dropped back, he has found plenty of success on slant routes. His receivers are led by junior Tyler Johnson, an All-Big Ten player who has 74 receptions for 1,112 yards and 10 touchdowns this season.

"It's kind of a contrast of styles," Johnson said. "So, it'll be interesting."

Georgia Tech ranked in the middle of the pack in Atlantic Coast Conference with its 27.5 points allowed per game, but ranked 12th in the nation by forcing 25 turnovers. It was a big improvement from last season's total of 10 takeaways. Junior defensive end Anree Saint-Amour led the Yellow Jackets with 11 tackles for losses, four sacks and three forced fumbles.

Minnesota's defense fell apart so badly during Big Ten play that Fleck fired defensive coordinator Robb Smith after a 55-31 loss to Illinois on Nov. 3 in which the Gophers allowed 646 total yards. In their first six conference games, Minnesota gave up averages of 43.2 points and 507.7 yards. The Gophers allowed 16.3 points and 305.6 yards over their final three games.

Minnesota defensive end Carter Coughlin tied for the Big Ten lead with nine sacks. The unit will be without senior linebacker Blake Cashman, who announced his intention to skip the bowl game and begin focusing on preparation for the NFL draft.

Both teams are rolling into the Motor City with momentum after late-season surges. The Yellow Jackets won four of their last five games and six of eight. After slumping to 4-5, the Golden Gophers managed to earn a bowl bid in Fleck's second season.

Georgia Tech hired former Temple coach Geoff Collins, a Georgia native, as Johnson's replacement earlier this month. So how important are the extra practices that come with a bowl bid?

"For us, it's not going to be real important," Johnson deadpanned. "They're going to have a new coach."

AP Sports Writers Dave Campbell in Minneapolis and Charles Odum in Atlanta contributed to this report.