Ga Tech coach Key wants to 'dominate' -- even against UGa 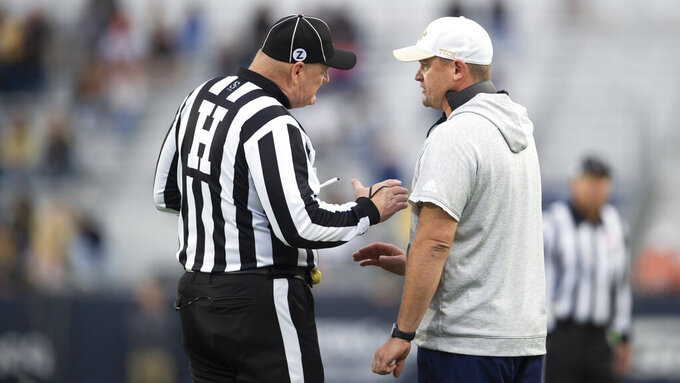 ATLANTA (AP) — Now that the Georgia Tech coaching job belongs to him, Brent Key is setting his sights as high as possible.

That other Power 5 program in the state?

Yep, he thinks the Yellow Jackets can compete with them.

Key, who served as the interim coach over the final eight games of the season after the firing of Geoff Collins, was formally introduced Monday as the full-time successor.

Key's most eyebrow-raising comments came when he brought up, without prodding, the reigning national champion and top-ranked Georgia Bulldogs.

“There's one thing I want to make sure everyone in this room understands, and everyone associated with Georgia Tech understands,” Key said in a room filled with family, boosters and players. “We have an opponent in this state that we will work 365 days a year to defeat, we will work 365 days a year to dominate. When we wake up in the morning, our goal is to dominate our opponent.”

Georgia Tech hasn't done much dominating the past few seasons, especially against the mighty Bulldogs.

The Yellow Jackets last beat Georgia in 2016, and they've only managed three wins in the last 21 meetings of the series known as “Clean, Old-Fashioned Hate."

In recent years, with Kirby Smart building one of the nation's most dominant programs, the divide between the schools seems more like the distance between Earth and the Moon — not just the 75 miles that separates the campuses.

Over the last five games, Georgia has outscored the Yellow Jackets 217-49, including this year's 37-14 victory.

Key intends to close the gap in the one-sided rivalry.

“The feeling of dominating your opponent is like no other. Whatever team is on our schedule, that is our goal. That is what we will toward every single day," Key said. "We have an opponent in this state that's included in that. For 365 days, we will work to dominate the opponent. Understand that.”

Georgia Tech slumped to new depths during Collins' regime, which was high on hype but scant on results.

He went 10-28 in three-plus seasons, never winning more than three games in a year and finishing with the worst winning percentage (.263) of a full-time coach in school history.

The Yellow Jackets went 7-19 in the Atlantic Coast Conference and beat only one team ranked in the Top 25.

Key did better than that in his eight games as interim coach, defeating a pair of ranked opponents — on the road, no less. Georgia Tech went 4-4 after he took over to finish 5-7, barely missing bowl eligibility.

J Batt, a former administrator at Alabama who took over as athletic director after Todd Stansbury was fired along with Collins, led the search for Collins' replacement.

Even though reports indicated the school was pursuing candidates with more head coaching experience — such as Tulane's Willie Fritz — Key wound up getting the job last week.

Georgia Tech President Angel Cabrera refused to address speculation that some candidates were turned off by tight budgets and a perceived lack of resources to upgrade the athletic program.

“I'm not even going to acknowledge the premise of the question,” Cabrera said defiantly.

Batt didn't discuss details of the search, either, other than to say it was clear Key was the right man for the job after watching him do the job the past couple months.

“I found a true leader that has a passion for Georgia Tech,” Batt said. “It was incredibly important to me to find the right guy to lead this program. There was strong interest from across the country and ... we conducted an exhaustive and disciplined national search. At the beginning and the end of that search, it was clear Brent Key was the right guy to lead this football program."

Key's most pressing priority is rounding out his coaching staff. He already dismissed three assistants, including offensive coordinator Chip Long.

With the transfer portal opening Monday and signing day not far behind, Key also will be focused on bringing in players who can make an immediate and long-term impact on the program.

Yet he stressed that he's not forgetting those on the current roster.