Getting his kicks: Iowa's Duncan winding down storied career 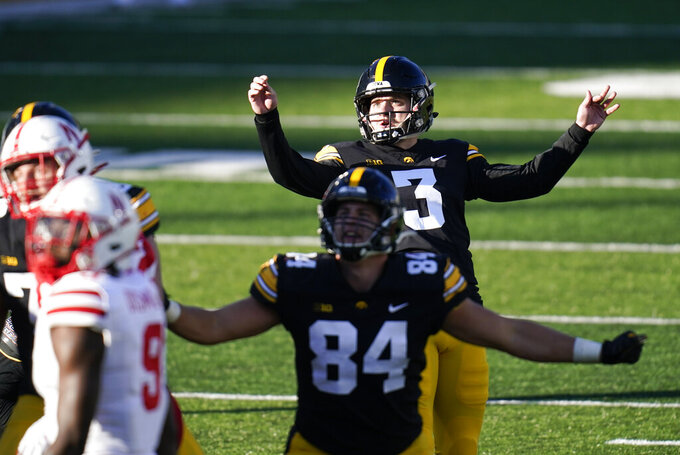 Keith Duncan was Iowa's starting kicker as a freshman, didn't kick in a game the next two years and then became a consensus All-American with a record-setting season in 2019.

He in all likelihood will make his final appearance at Kinnick Stadium on Saturday when No. 25 Wisconsin visits the 19th-ranked Hawkeyes.

“I’ve loved every single second of it and wouldn’t trade it for the world,” Duncan said. “(Saturday) will most likely be my last home game. It’s a very emotional thing to say and it’s been great being here, but I think it’s time to move on.”

Duncan, if he wanted, could return for a sixth season. The NCAA is granting athletes an additional year of eligibility because of the COVID-19 pandemic. Duncan said he wants to pursue an NFL career.

Duncan showed up in Iowa City as a walk-on and wasn't put on scholarship until the end of his fourth season, getting the news from coach Kirk Ferentz minutes after he kicked the game-winning field goal against Nebraska.

Duncan attended high school in Weddington, North Carolina, and burst onto the scene as a collegian with a 33-yard field goal as time ran out to beat second-ranked Michigan 14-13 in 2016.

Duncan redshirted in 2017 after losing his job to Miguel Recinos, and he failed again to beat out Recinos in 2018.

He reclaimed the job last season and set the Big Ten record with 29 field goals, tied for first nationally, and was a finalist for the Lou Groza Award. His fun-loving personality showed through when he blew kisses toward the Nebraska sideline after kicking a 48-yard field goal with time winding down to beat the Cornhuskers 27-24.

This season Duncan is 12 for 16 on field goals, kicking four in a 26-20 win over Nebraska two weeks ago.

Duncan said he's always been confident, but it took time to win over his teammates and coaches.

He recalled a practice in 2016 when Ferentz called on him to work with the top field-goal unit. As Duncan trotted onto the field, offensive coordinator Brian Ferentz directed some friendly trash talk at him.

Duncan wasn't fazed and made his kick.

"I looked at him like, ‘So you like that?’ ” Duncan said, laughing. “I kind of went after him a little bit. He loved it and cracked a smile. Having that relationship with all the coaches here is awesome. We can joke with each other. We can have great conversations… We go back and forth joking-wise all the time, not only Brian but all the coaches here. I’m going to miss it.”

Duncan said he’ll also miss the time spent off the field with teammates, whether at a cookout or just hanging out at someone’s house.

“I could literally go through hundreds of my favorite memories,” he said, adding that he's built lifelong relationships. "That’s something I’ll cherish forever. It’s a very happy part of my life, a great decision I made by coming here.”

When he moved to Iowa City in 2016, he didn’t know what to expect living more than 900 miles from home.

Fast forward to 2020, and Duncan said he wants to live in Iowa City at some point after college.

“It’s a great community and I love being a part of it," he said. "I love to volunteer around here and anywhere that needs help. I’ve said it before, but I think it’s our responsibility as Iowans to help others. Just having that sense of community and belonging is great. It not only picks people up, but it helps you with gratitude.”

Duncan’s home finale won’t be in front of a packed house because of COVID-19 policies. Instead, 12 or 13 family members will attend.

“Being here for five years is something I never really imagined,” Duncan said. “I’ve learned so much being here. Having a senior day, whether it’s with or without fans, is special to me. I love being a part of the Iowa program.”