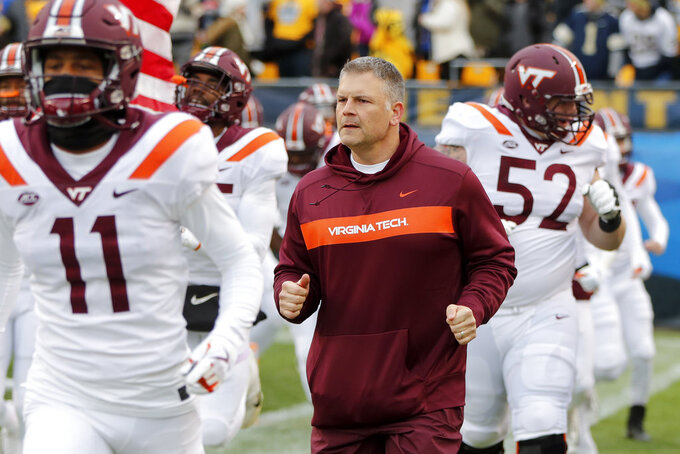 COLUMBIA, S.C. (AP) — Hurricane Florence and the looming bowl season have South Carolina and Virginia Tech closing their football seasons against teams that were never on their schedule.

Both schools canceled games on Sept. 15 because of the storm heading for the Virginia and Carolina coastlines.

The Gamecocks (6-5) will host Akron (4-7) on Saturday looking to improve their bowl standing, while the Hokies (5-6) play at home against Marshall (8-3) — a game they scheduled in hopes of becoming bowl eligible.

In an odd twist, the Gamecocks were scheduled to play Marshall on Sept. 15 while the Hokies were supposed to play East Carolina. The Pirates (3-8), as part of the hurricane shuffle, will close the season at North Carolina State (8-3) on Saturday.

Akron has no problem being a substitute — it's good experience and pays well.

The Zips are being paid $1.3 million.

"We needed the game, in part, because of our athletic budget," said Akron coach Terry Bowden, whose team's scheduled season-opening contest at Nebraska on Sept. 1 was canceled because of strong storms and lightning.

South Carolina could have kept Marshall on the schedule but coach Will Muschamp did not want to give up the team's Oct. 20 off day smack in the middle of the season, and the Gamecocks couldn't commit to Dec. 1 until they were eliminated from contention in the Southeastern Conference Eastern Division race.

Gamecocks administrators stayed in touch with Marshall, which had championship game hopes of its own in Conference USA. But as time closed in to book the field for a game, South Carolina athletic director Ray Tanner got Akron to agree to the game.

Now Marshall is headed to Blacksburg to take on Virginia Tech.

The Hokies kept their chances alive for a 26th straight bowl trip (the longest in the nation now that Florida State's 36-game run ended this season) with a 34-31 OT victory over rival Virginia last week.

Virginia Tech did not announce the Marshall game until Nov. 18 after the Thundering Herd missed out on their conference title game. Marshall will get $300,000 and future scheduling considerations from Virginia Tech.

Marshall would've gotten $100,000 for its willingness to play the what-if game — had the Hokies lost to Virginia and were eliminated from bowl consideration, there would be no game this weekend.

Florence churned through the Atlantic Ocean about three months ago and grew to Category 4 strength. Its path was unpredictable until it finally made landfall in southeastern North Carolina and trekked through South Carolina. The storm was blamed for 53 deaths.

"For him to get this done and us to have this opportunity, we're excited about it," Fuente said.

The Hokies were joyous after defeating the highly favored Cavaliers. Fuente said it was important for his players to settle their emotions and get back to work if they want to play in a bowl.

"We've certainly handled a lot of disappointment," Fuente said. "Now let's handle some celebration and people patting us on the back and let's get ready for this next game."

Said South Carolina's Muschamp: "We've got an extra week of the season."

Two teams the had games canceled as Florence approached — West Virginia was scheduled to play at North Carolina State and North Carolina was hosting UCF — won't have makeup games. The Mountaineers and Tar Heels each played 11 regular-season games. No. 7 UCF takes on Memphis for the American Athletic Conference championship on Saturday.

Among the other non-championship Power Five contests scheduled Saturday is No. 24 Iowa State hosting Drake, an in-state school whose football program does not offer scholarships. The Cyclones had their season opener with South Dakota State canceled because of lightning and strong storms.