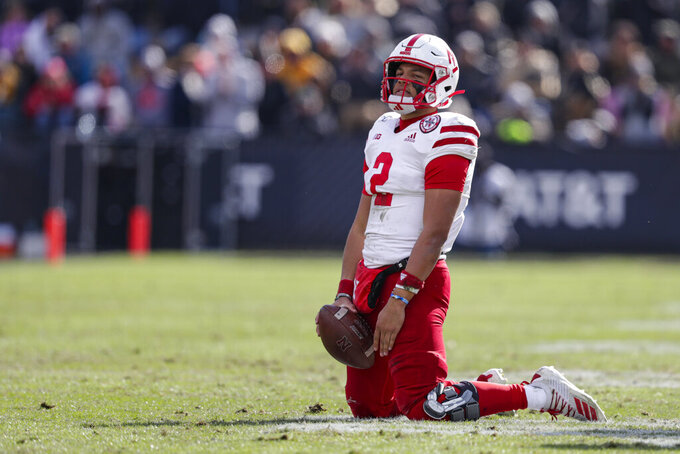 Nebraska quarterback Adrian Martinez (2) falls to his knees after failing to pick up a first down against Purdue during the second half of an NCAA college football game in West Lafayette, Ind., Saturday, Nov. 2, 2019. Purdue defeated Nebraska 31-27. (AP Photo/Michael Conroy)

LINCOLN, Neb. (AP) — The issue for wary Nebraska fans this week isn’t whether the Cornhuskers can upset No. 15 Wisconsin. It’s about how many yards Jonathan Taylor will run for this time.

The Badgers’ star has rushed for more than 200 yards two straight years against Nebraska and will go into Saturday coming off his season-high 250-yard outing against Iowa.

“He’s big, he’s powerful, and he’s slippery,” Nebraska nickelback JoJo Domann said. “He can slip through these tight gaps that their big O-linemen help create, and then he’s just a workhorse so you have to gang tackle him. You really have to knife him or wrap him up, can’t really hit him on top or take him down with your arms. He’s the full package and we've got to bring it this week.”

Nebraska (4-5, 2-4) has been mostly inept against the Badgers’ ground game since entering the Big Ten.

Wisconsin has averaged 312.5 yards rushing while winning seven of eight in the series with Nebraska, including the last six. Melvin Gordon set a school record with 408 yards in the 2014 game. Gordon and Montee Ball had 216 and 202 yards, respectively, in the 2012 Big Ten championship game rout of the Huskers.

Taylor ran for 249 yards and two touchdowns against Nebraska in 2017 and for 221 yards and three TDs last season. The 5-foot-11, 219-pound junior will be going for his 11th 200-yard game Saturday, which would put him in a four-way tie for most in a career by a Football Bowl Subdivision player.

“I think coaches always do a great job of putting together a great scheme,” Taylor said. “They always say, ‘There’s nothing magic in the plays, it’s always the players.’ ”

The Badgers are two games behind Minnesota in the Big Ten West and need a win in Lincoln to keep alive their hopes for the division title. Wisconsin must win its final three regular-season games, including against Minnesota, and have the Gophers lose one or both of their next two games.

“We know the task at hand,” Taylor said. “We understand that we have to play clean football from here on out. It’s November, and you’ve got to playing your best ball at this point.”

The teams will play for the Freedom Trophy. Wisconsin is 5-0 since the hardware was introduced in 2014.

“I don’t know how long this trophy has been in play, but I think it was a big rivalry back before they had the trophy, so they created the trophy, and now it hasn’t left here,” Badgers linebacker Zack Baun said this week in Madison. “I don’t know if it’s much of a rivalry anymore.”

The status of freshman running back-receiver Wan’Dale Robinson, the Huskers’ most reliable offensive threat, might not be decided until game time. Robinson still is recovering from an undisclosed injury sustained against Purdue on Nov. 2.

Nebraska, a 14 ½-point underdog, has lost 16 in a row as a double-digit ’dog since Bill Callahan’s 2005 team beat 10-point favorite Michigan 32-28 in the Alamo Bowl. The Huskers have lost nine straight against Top 25 opponents.

Wisconsin athletic director and former coach Barry Alvarez, who played linebacker for the Huskers from 1965-67, built the Badgers into a power by using the pound-the-ground template that made Nebraska one of the nation’s top teams from the 1970s to ’90s. Current Huskers coach Scott Frost, though using a much different system, wants to be like Wisconsin now.

“We need to get our program to where we can give them a run and compete with them because they’ve been consistently probably the best team in our half for quite a few years,” Frost said. “They’re probably going to have a target on their back from every Big Ten West team for a while because they’ve been at the top.”