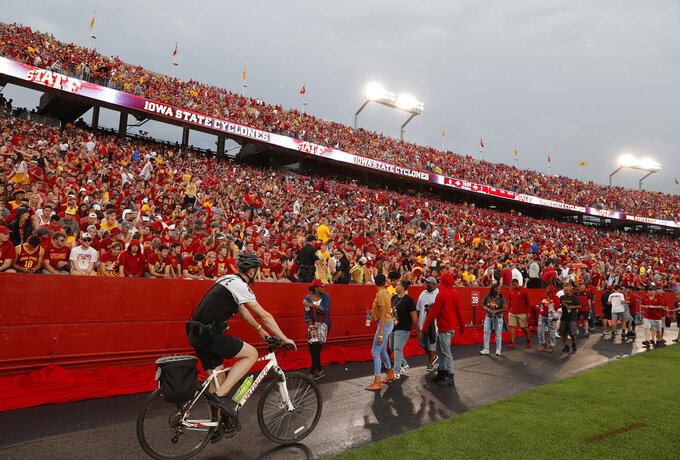 Iowa State has found a replacement for its canceled opener.

The Cyclones said Wednesday they will host Incarnate Word on Dec. 1 — unless Iowa State qualifies for the Big 12 title game or Incarnate Word reaches the FCS playoffs.

Iowa State will pay Incarnate Word $300,000 for the game and provide use of a charter aircraft for the team to fly to Iowa.

The Cyclones and South Dakota State played only a few minutes before their Sept. 1 game was called off because of lightning in and around Ames, Iowa. South Dakota State received its $425,000 payout, despite playing less than half of a quarter.

The added game will give Iowa State (0-1) an extra shot at the six wins needed for bowl eligibility, or perhaps a chance to improve their bowl position if they reach the minimum number of victories before then. The Cyclones host No. 5 Oklahoma on Saturday as a 17-point underdog.

"We explored multiple options to give our student-athletes every opportunity to compete and, ultimately, be eligible to participate in a bowl game," Iowa State athletic director Jamie Pollard said. "Our student-athletes only have so many chances in their career to play."

"We recognize the process of re-issuing both tickets and parking will present its own set of challenges for our department and fans," Pollard said. "Our staff will be in contact directly with our fans as soon as more details are finalized."