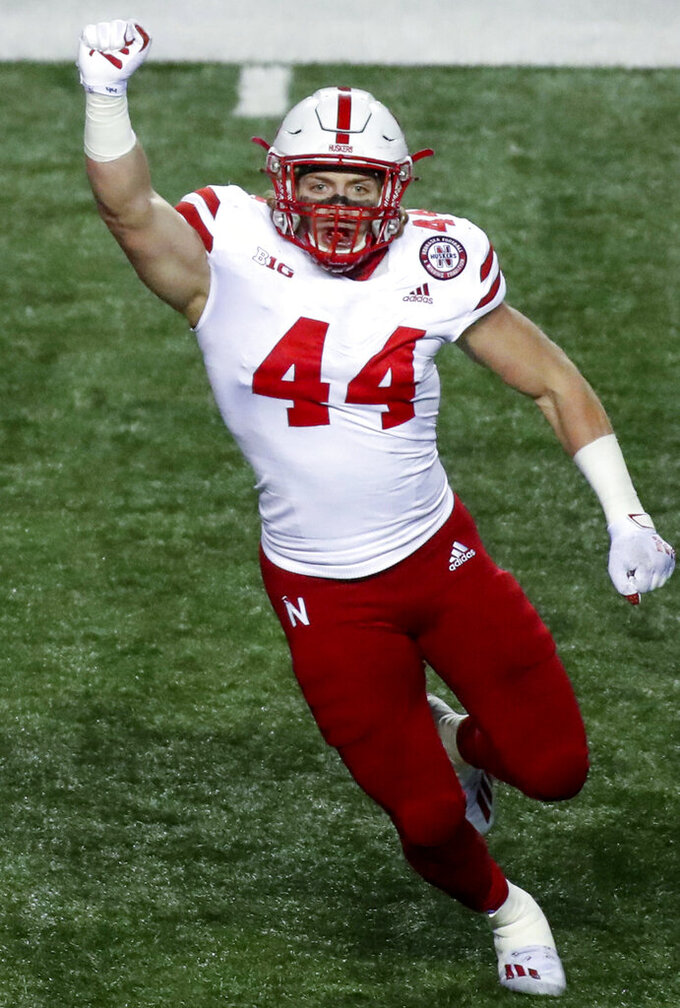 Nebraska linebacker Garrett Nelson (44) reacts after he made a tackle on a fourth-down play during the first half of an NCAA college football game against Rutgers, Friday, Dec. 18, 2020, in Piscataway, N.J. (Andrew Mills/NJ Advance Media via AP) 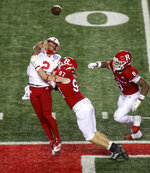 PISCATAWAY, N.J. (AP) — If Nebraska coach Scott Frost could bottle up the second half of the final game of the season against Rutgers, the Cornhuskers might become a very good team in the Big Ten Conference in 2021.

The problem was the first half and the early part of the third quarter was a disaster. Four turnovers, a fake punt for a first down and a 98-yard kickoff return for a touchdown came close to costing the Cornhuskers a game in which they gained 620 yards and held the ball more than 39 minutes.

Adrian Martinez ran for two touchdowns and threw for another and mistake-prone Nebraska wore down Rutgers 28-21 on Friday night in the kickoff to Big Ten Champions Week.

“We failed miserably on that in the first half, made way too many mistakes,” Frost said after the game. “That’s just been too common in our program. We’ve got to get all that fixed. It was better in the second half. They played smarter in the second half and was really impressed with the fight.”

Nebraska had a lot of people contribute.

Dedrick Mills rushed for a career-high 191 yards and Wan'Dale Robinson ran for a touchdown and caught another as the Cornhuskers (3-5, 3-5) denied Rutgers (3-6, 3-6) a Big Ten-best four wins in a season.

“We had to set the story straight,” said Martinez, who was 24 of 28 for 255 yards passing and carried 23 times for 157 yards as the Huskers rallied from a 14-7 halftime deficit. “We had to define this team's story in the last game and we came out in the second half and did that.”

Martinez scored on runs of 41 and 1 yard and threw a 14-yard scoring pass to Robinson that tied the game at 21-all late in the third quarter. His 1-yard run in the fourth quarter capped a nine-play, 92-yard drive that was the difference.

Safety Christian Izien intercepted two passes and recovered two fumbles for Rutgers, which started to turn things around this season with Greg Schiano back as coach for a second stint. The Scarlet Knights were 0-9 in the last two seasons in the conference.

“You know I'm really proud of them,” Schiano said. “It’s been one of two teams in our league that played every game. We talked about it. Our number one opponent was COVID. And if we were able to defeat a No.1 opponent as a program, we would have the opportunity to get better. And you get better in practice, but you also get better in live competition in games, and we were able to improve. So we won some, we lost some, but we got better.”

A 43-yard run by Mills set up a 1-yard, fourth-down TD run by Robinson to give Nebraska a 7-6 lead early in the second quarter.

A 33-yard scoring run by Isaih Pacheco on a four-and-1 and a 2-point conversion pass from Art Sitkowski to Bo Melton gave the Scarlet Knights a 14-7 lead at halftime.

Sitkowski (10 of 20 for 122) started because Nebraska transfer Noah Vedral was not able to play because of an ankle injury sustained last week.

Schiano said Vedral wanted to play but he never got close to being ready.

Martinez tied the game early in the third quarter with a 41-yard run but Aron Cruickshank put Rutgers ahead with a 98-touchdown return on the ensuing kickoff.

Nebraska: Frost has a high note to go into the offseason but this is the end to another disappointing season. This year was marked by too many mistakes.

Rutgers: While it's a losing record, it's the Scarlet Knights best season in the Big Ten. Their three conference wins equal their total from the previous four seasons combined.

The season should be over for both schools. Frost said Nebraska would consider another game based on when it was offered.