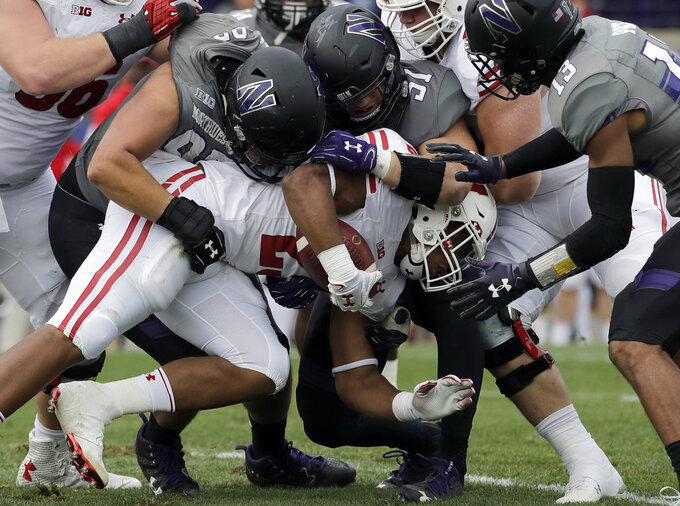 In this Oct. 27, 2018 photo Wisconsin running back Jonathan Taylor is tackled by Northwestern defenders during the first half of an NCAA college football game in Evanston, Ill. Taylor had his worst game of the season for Wisconsin, leaving his race for the national rushing lead with Memphis Darrell Henderson in a virtual dead heat two-thirds of the way through the season. (AP Photo/Nam Y. Huh)

Jonathan Taylor had his worst game of the season for Wisconsin, leaving his race for the national rushing lead with Memphis Darrell Henderson in a virtual dead heat two-thirds of the way through the season.

Taylor was limited to 46 yards on 11 carries in the Badgers' 31-17 loss at Northwestern on Saturday. Henderson had just 14 yards on five carries against Missouri on Oct. 20 before leaving the game early with an undisclosed injury, and Memphis had an open date Saturday.

Taylor entered this past weekend with eight straight 100-yard games since running for a career-low 41 yards on 15 carries against Ohio State in last year's Big Ten championship game. Taylor carried seven times in the first quarter against Northwestern, but he fumbled twice and his role decreased.

Matt Colburn of Wake Forest ran 20 times for 243 against Louisville; Georgia Tech redshirt freshman quarterback Tobias Oliver had 40 carries for 215 against Virginia Tech in his first start; Arizona's J.J. Taylor had 30 runs for 212 against Oregon and Utah's Zack Moss carried 26 times for 211 yards against UCLA.

Duke's Deon Jackson became the first player to go over 400 all-purpose yards this season, and third in the Atlantic Coast Conference ever, when he piled up 403 in a loss at Pittsburgh.

Jackson had a career-high 162 rushing yards for his first career 100-yard performance; 89 receiving yards, including a 74-yard touchdown; and 152 yards in kick returns.

For the first time in 12 years, there were two 100-yard interception returns on the same day in the Football Bowl Subdivision.

Middle Tennessee's Reed Blankenship picked off Blake LaRussa's pass in the end zone on the last play of the first half and ran it back all the way in a win over Old Dominion. Utah State's Shaq Bond did the same thing after intercepting Sheriron Jones in the second quarter of a win over New Mexico.

Penn State's last four games have been decided by six points or less: losses of 27-26 to Ohio State and 21-17 to Michigan State and wins of 33-28 over Indiana and 30-24 over Iowa. The last time the Nittany Lions played four consecutive games decided by six points or less was 1894: a 6-6 tie against Navy and wins of 12-6 over Bucknell, 6-0 over Washington & Jefferson and 9-6 over Oberlin.

Central Connecticut's Aaron Dawson set an NCAA Division I record (FCS and FBS) for rushing yards in a half when he amassed 308 in the second half against Wagner. Dawson finished with a Northeast Conference-record 361 yards and set the program record with five touchdowns. He averaged 15 yards per carry on 24 attempts.