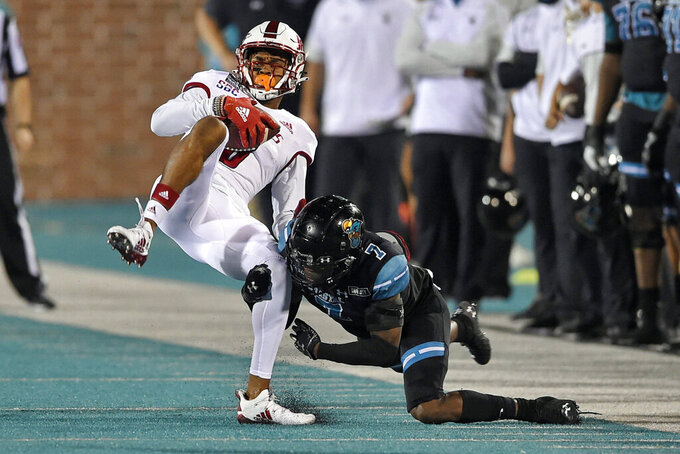 FILE - In this Nov. 7, 2020, file photo, Coastal Carolina's D'Jordan Strong (7) tackles South Alabama's Jalen Tolbert during the first half of an NCAA college football game in Conway, S.C. Tolbert showed up at South Alabama as a low-rated recruit. When he leaves, the NFL more than likely will be his next stop. (AP Photo/Richard Shiro, File)

Jalen Tolbert showed up at South Alabama as a low-rated recruit. When he leaves, the NFL more than likely will be his next stop.

“I don't know how many stars Jalen had coming out of high school, but he’s another example of a guy who got to college and has really worked hard and made himself a better player every year,” Reese’s Senior Bowl executive director and former NFL scout Jim Nagy said.

Tolbert is the NFL prospect spotlighted this week by The Associated Press with help from Nagy.

The senior is the quintessential self-made player. A two-star prospect by 247sports in 2017, he received offers mostly from FCS and smaller FBS programs before deciding to stay in his hometown of Mobile to play for the Jaguars.

“I started playing kind of late, and I have been constantly learning even back during the spring," Tolbert said last month, according to AL.com. "I’ve learned about different coverages and schemes team might play. I’ve also learned about reading defenses and just becoming a better wide receiver. I trained with some NFL guys over the summer and they just showed me some steps and other things I can work on to improve my game for this season.”

Tolbert returned to South Alabama after coaching turnover had him thinking about declaring for the draft. He's now Nagy's highest-rated senior receiver in the Southeast region and second overall behind Alabama junior John Metchie III.

Tolbert caught five passes for 168 yards in a 31-7 season-opening win over Southern Mississippi. The Jaguars visit Bowling Green on Saturday.

“We expect a really big statistical year from Jalen,” Nagy said. “His head is on right. He’s a leader. He’s a high-character player, so it’s going to be exciting to see where he can go through the pre-draft process.”

SIZE & STATS: Tolbert has prototypical wide receiver size at 6-foot-3 and 190 pounds. He holds the South Alabama career record with 1,834 receiving yards and is 56 catches shy of the record for receptions. He averages 18.2 yards per catch for his career and has gone over 100 yards in four of his last 13 games.

BIGGEST MOMENT: Tolbert caught 10 passes for 252 yards and three second-half touchdowns in a 38-31 come-from-behind road win over Arkansas State last Nov. 28. His 51-yard TD catch with under 5 minutes left gave the Jaguars the lead for good.

SCOUT’S TAKE: “He’s got a really big catch radius. He can snatch it off his shoe tops, he can go up and get it, so he’s really a friendly target that way,” Nagy said. “And he’s creative after the catch. He’s got a way of getting away from people. He’s done really nice job in the red zone over the years and is a good high-point player. I know they’ll use him a lot that way.”

The only question is Tolbert's top-end speed.

“He’s so fluid, I think the (scouts) underestimate his speed,” Nagy said. “Sometimes with fluid guys it’s harder to gauge true speed. He does make plays down the field and can get down the field. In the Sun Belt, I think there is going to be some question about what that is going to look like on a field when he gets with NFL-type DBs.”

DRAFT WATCH: Much will hinge on his pre-draft workouts. If Tolbert shows out in the 40-yard dash, Nagy said, he can be a Day 2 pick.

Tolbert doesn’t necessarily project as an NFL team’s No. 1 receiver, but he fits the profile of a starter.

“When he committed himself to coming back," Nagy said, "he really committed himself to becoming a pro, something a lot of college guys don’t do. He’s going to have a leg up there. He’s prepared this whole off-season season like an absolute pro, watching tape and training with NFL players and trying to get better.”