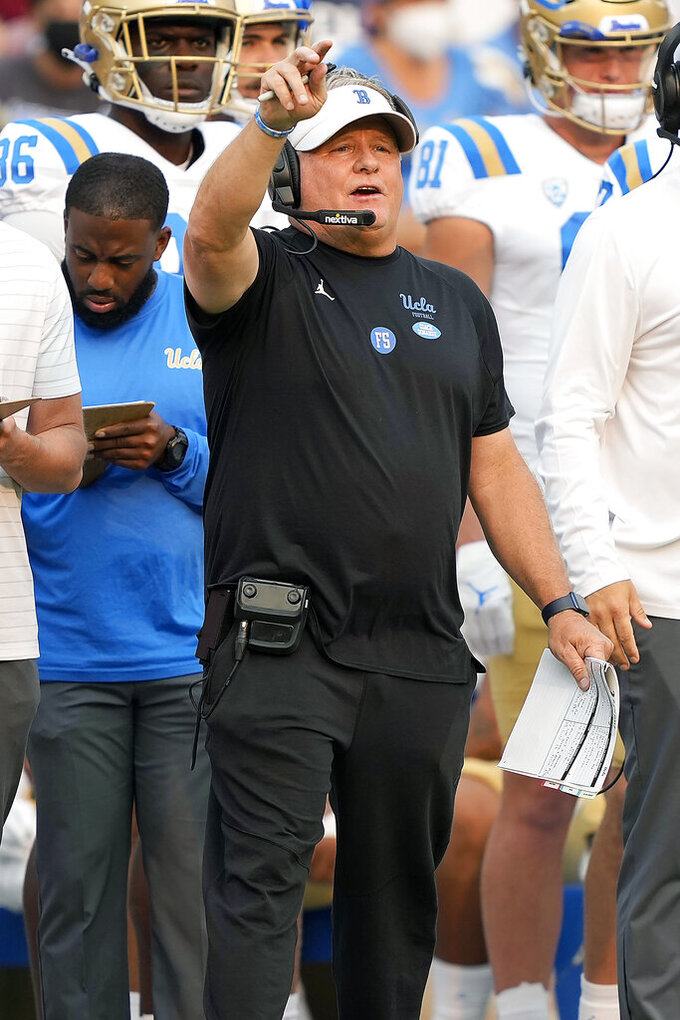 UCLA head coach Chip Kelly calls out to his players during the second half against Stanford in an NCAA college football game Saturday, Sept. 25, 2021, in Stanford, Calif. (AP Photo/Tony Avelar)

LOS ANGELES (AP) — There were many games during Chip Kelly's first two seasons at UCLA where the Bruins would allow at least 70 rushing yards by the end of the first quarter.

The 20th-ranked Bruins go into Saturday's game against Arizona State with the nation's sixth-ranked run defense, yielding only 64 yards per contest.

“I think our performance now is what we should have done these past few years. It’s been a long time coming but we’ve started to get to where we want to be,” senior defensive lineman Odua Isibor said.

In last week's 35-24 win over Stanford, the Bruins held the Cardinal to 67 yards on the ground. Quarterback Tanner McKee ended up leading the team with 42 yards and had the longest gain of the day with a 30-yard scramble during the fourth quarter.

Safety Qwuantrezz Knight and defensive lineman Mitchell Agude, who are the team's top two tacklers, are also among the highest-rated run stoppers at their position, according to Pro Football Focus. Knight is fourth among safeties and Agude fifth among edge rushers.

The Bruins have also benefited from not facing teams with strong rushing attacks. Stanford had only one scholarship player at running back due to injuries. LSU, which was held to 49 yards, was also missing three of its running backs.

The Sun Devils (3-1, 1-0) have 29 rushing touchdowns over their last seven games dating back to last season, which is the most nationally. Dating back to 2019, they have also gone over 200 yards in six of the last 10 games.

Not only do the Bruins have to prepare for dual-threat quarterback Jayden Daniels, but a deep running back group that features Rachaad White, Daniyel Ngata and DeaMonte Trayanum.

Daniels rushed for 125 yards earlier this season against UNLV, while White has the most touches in the conference by a running back. The senior leads the Sun Devils in rushing and receiving.

Kelly said the Sun Devils have evolved into a more run-oriented team the past couple seasons under Herm Edwards. Even though Arizona State is deep, the first priority will be to contain Daniels.

“We just wanna make sure that we’re acknowledging his ability to run the ball as well,” Isibor said. “But everything’s the same, we’re still working hard, we’re still running to the ball, all things like that. We’re not treating it too differently, we just put emphasis on his running ability as well.”