No. 23 Pitt has a chance to prove itself against Clemson 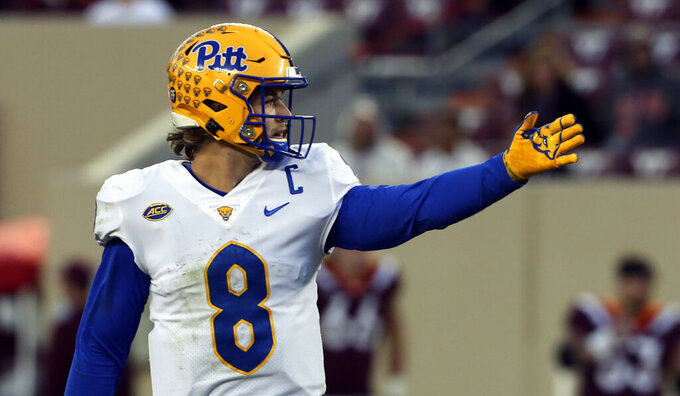 Line: Pittsburgh by 3 1/2, according to FanDuel Sportsbook.

The Panthers have a chance to show they are legitimate contenders not just for the ACC Coastal Division title but the ACC championship and maybe — big maybe — fringe contenders for the College Football Playoff. Clemson could reassert its usual position as the ACC bullies but needs its offense to find a way to keep pace with the high-scoring Panthers.

Clemson's secondary against Pitt's wide receivers. Pitt QB Kenny Pickett is putting up eye-popping numbers thanks in large part to the development of a group that's gone from liability to asset. Sophomore Jordan Addison's nine touchdown receptions lead the ACC and tight end Lucas Krull's five touchdown catches are the most among ACC players at his position. If the Tigers can keep Addison and company in check, Pitt would have to turn to a running game that's been inconsistent at best.

Clemson: LB James Skalski. He remains a force in his sixth season with the Tigers. His 49 tackles are tied for the team lead as do his nine quarterback pressures. The more pressure Skalski and the Tigers can put on Pickett, the better. If they are able to get in Pickett's face and disrupt his timing, Pitt's offense will quickly become one-dimensional.

Pitt: Pickett. The fifth-year senior is making the most of his decision to return for one more season rather than enter the NFL draft. Pickett has thrown for 21 touchdowns against just one interception, zooming up NFL draft boards in the process. Pickett, however, has struggled against Clemson. He has completed just 26 of 55 passes for 217 yards with two touchdowns and five interceptions in two games against the Tigers.

This is the first meeting between the two teams in Pittsburgh. ... The Tigers have dominated the last two matchups since Pitt pulled off a 43-42 stunner in Death Valley in 2016, beating the Panthers by a combined 94-27 in 2018 and 2020. ... Clemson's defense is allowing just 12.5 points per game, second in the nation behind Georgia. ... Clemson finds itself as an underdog in a regular-season game for the first time since 2016 when Tigers were one-point underdogs against Louisville at home, a game Clemson won. ... Pickett needs 15 completions to surpass Alex Van Pelt for the most career completions in school history (867). ... Pitt's 48.3 points per game tops the ACC and rank fourth in the country.