No. 25 Aztecs put win streak on line vs Long's defense 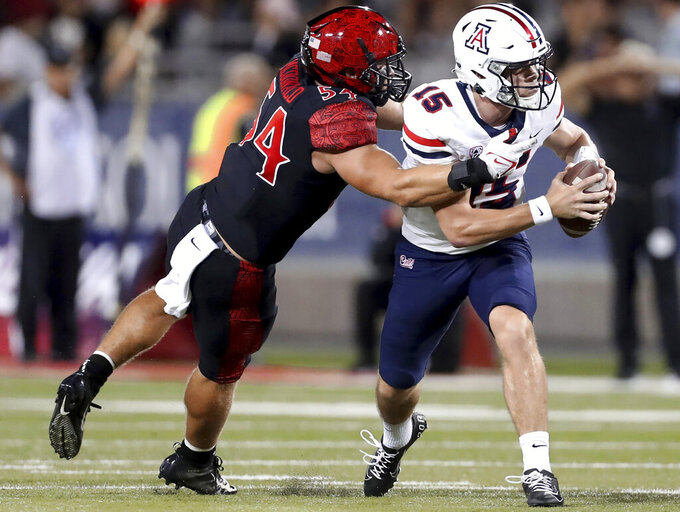 Line: San Diego State by 19 1/2, according to FanDuel Sports Book.

San Diego State is 4-0 for the second time in 40 years and back in the AP Top 25 for the first time since Nov. 3, 2019, just in time for its MWC opener. This is the first game between the teams since Rocky Long retired as SDSU’s head coach after the 2019 season following a nine-season run and then unretired a few weeks later to become defensive coordinator at his alma mater, where he was head coach from 1998-08. Lobos head coach Danny Gonzales was on Long’s SDSU staff for seven seasons.

SDSU RB Greg Bell against Long’s 3-3-5 defense. Bell is expected to return from an undisclosed injury to his left shoulder area suffered early in a victory against Towson that ended his streak of three straight 100-yard games. Long’s defenses always focus on trying to stop the run. The Lobos were run over last week by Air Force’s triple option, allowing 408 yards rushing and five touchdowns in a 38-10 loss.

New Mexico: QB Terry Wilson Jr. is a dual threat who has passed for 931 yards and seven touchdowns, with three interceptions, and rushed 41 times for 66 yards and one score.

San Diego State: Senior RB Greg Bell opened the season with three straight 100-yard games before being hurt early in last week’s win against Towson. He has 409 yards and four touchdowns on 73 carries. The Aztecs were off last week, giving Bell extra time to heal.

The Aztecs are in their second season of playing home games at Dignity Health Sports Park in Carson, the home of the Los Angeles Galaxy of the MLS, while their new stadium is being built in San Diego. Aztec Stadium is due to open in time for the 2022 season. ... The Aztecs have beaten the Lobos seven straight times since 2009. ... Long has coached the winning team 15 straight times in this rivalry, including eight straight from 2000-07 while with New Mexico and then seven straight with SDSU. ... The Aztecs expect QB Jordon Brookshire to return from a right ankle injury suffered in a win at Arizona on Sept. 11. ... SDSU also started 4-0 in 2017. Before that, their last 4-0 start was in 1981.