No. 4 Georgia a big favorite against state rival Ga Tech 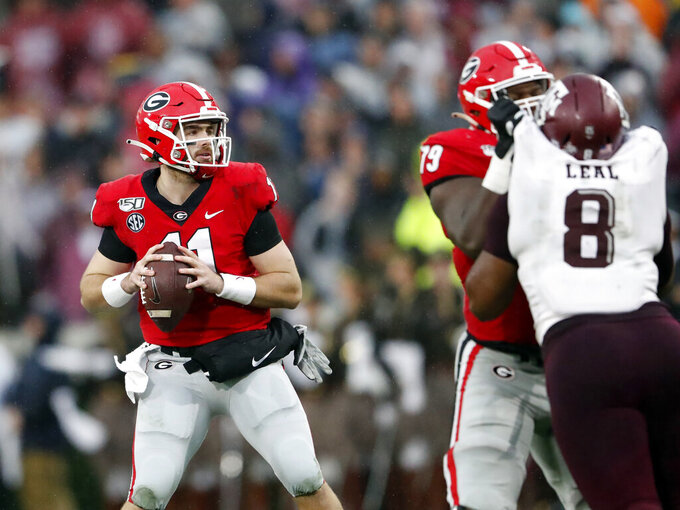 Georgia can’t afford a slip-up against its state rival if it wants to have a shot at making the College Football Playoff for the second time in three years. The Bulldogs must knock off the Yellow Jackets and then upset No 1 LSU in the SEC championship game on Dec. 7 to earn a spot in the four-team tournament.

Georgia’s defensive front vs. Georgia Tech RB Jordan Mason. The Bulldogs have allowed just 68.5 yards per game on the ground — second in the nation behind Utah. Last week, they held Texas A&M to minus-1 yards rushing, one week after the Aggies piled up 319 yards on the ground against South Carolina. If the Yellow Jackets are to have any chance of an upset, they must create running room for Mason, who is coming off a 141-yard effort against N.C. State. The sophomore has rushed for 862 yards and seven touchdowns on the season.

Georgia: QB Jake Fromm. The junior signal-caller has gone three straight games without completing 50 percent of his passes, matching the total for his entire career up to that point. Fromm’s struggles have drawn extra scrutiny when compared to his former backup, Justin Fields, who transferred to Ohio State and is having a huge year for the unbeaten Buckeyes.

Georgia Tech: WR Ahmarean Brown has added a big-play element to the Yellow Jackets’ work-in-progress passing game. The 155-pounder leads the team with 20 catches for 393 yards and seven touchdowns, averaging just under 20 yards per reception. Brown has tied Calvin Johnson’s school record for most TD catches by a freshman.

Georgia has won nine straight games at Georgia Tech’s Bobby Dodd Stadium. The home team’s last victory over the Bulldogs in Atlanta was a 51-48 overtime thriller in 1999. ... James Graham is Georgia Tech’s first freshman quarterback to throw for 1,000 yards in a season since Reggie Ball in 2003. ... Georgia’s defense also ranks in the top five nationally in points allowed (10.7 per game) and total yards (267.8). ... Georgia Tech has allowed 201 yards per game through the air, ranking second in the Atlantic Coast Conference. ... Georgia’s senior class enters the game with a 42-11 record over the past four seasons.