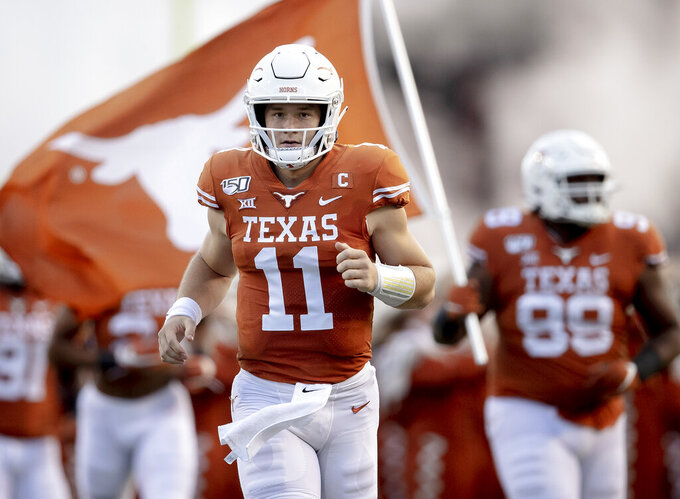 FILE - Texas quarterback Sam Ehlinger (11) runs onto the field before the team's NCAA college football game against Oklahoma State on Saturday, Sept. 21, 2019, in Austin, Texas. Ehliger gets his last chance to win a Big 12 title for 14th-ranked Texas, which lost the league championship game two years ago after beating Oklahoma earlier that season. (Nick Wagner/Austin American-Statesman via AP, File)/Austin American-Statesman via AP)

Oklahoma is 3-for-3 in winning Big 12 championships and making the College Football Playoff since Lincoln Riley became head coach of the fifth-ranked Sooners.

Those titles came with three different quarterbacks: two Heisman Trophy winners and a Heisman runner-up for Oklahoma who started their college careers at other Power Five schools.

The Sooners are still considered the overwhelming favorite to win their sixth consecutive Big 12 crown overall because nobody has dethroned them with Riley there. He became their offensive coordinator before the 2015 season, and two summers later got promoted after Bob Stoops' surprising retirement.

This time, Oklahoma's fourth quarterback in as many seasons will be a highly touted prep prospect recruited by Riley — redshirt freshman Spencer Rattler, who won the job over sophomore Tanner Mordecai. Rattler takes over as the starter at the same time when 1,000-yard rusher Kennedy Brooks isn't playing what would have been his junior season, and top receiver CeeDee Lamb (1,327 yards, 14 touchdowns) is an NFL rookie.

Sam Ehliger gets his last chance to win a Big 12 title for 14th-ranked Texas, which lost the league championship game two years ago after beating Oklahoma earlier that season. Charlie Brewer and Baylor took the Sooners to overtime in last year's title game, though the tough-minded quarterback didn't play after halftime following a hard hit he delivered on a defender on a running play before taking a hard sack.

Spencer Sanders stood out as a freshman dual-threat quarterback last season for No. 15 Oklahoma State, which has preseason AP All-America running back Chuba Hubbard (2,094 yards rushing, 21 TDs in '19). The Cowboys also have receiver Tylan Wallace (53 catches, 903 yards and eight TDs), who was limited to eight games because an ACL tear.

Outside the opponents on the field, there is also the uncertainty about if COVID-19 the led to Big Ten and Pac-12 to not play football this fall could somehow disrupt the season before the Sooners or anyone else could wrap up the Big 12 title.

Iowa State, in coach Matt Campbell's fifth year, has a chance for its fourth consecutive winning season, something the No. 23 Cyclones haven’t done since five consecutive 4-3-1 records from 1923-27.

Junior quarterback Brock Purdy is going into his third season as the starting quarterback, having taken over the job as a true freshman early in the 2018 season. Purdy last year set school records with 3,982 yards and 27 TDs passing, leading the Big 12 with 306.3 yards per game. The Cyclones, now more than a century without any conference title, averaged a school-record 444 total yards per game.

The 10-team Big 12, the only Power Five conference that plays a round-robin schedule, is sticking with that format, though the schedule was shuffled with some flexibility added for rescheduling any games affected by the pandemic. Every team plays one non-conference game, at home on Sept. 12. Conference play begins Sept. 26, the start of an 11-week stretch for nine league games before the Big 12 title game Dec. 12 or Dec. 19, if an extra week is needed.

NO DAY AT THE FAIR

Texas and Oklahoma still plan to play their Red River rivalry game in Dallas at Cotton Bowl Stadium which sits on the edge of the midway at the State Fair of Texas.

The atmosphere around the game will certainly be different this year since the fair has already been canceled because of the pandemic. The plan is to allow fans for the Oct. 10 game, but with the stadium at only about 25% of its capacity.

A year after the biggest coaching turnover in Big 12 history, with four teams having new coaches, Baylor's Dave Aranda is the only newcomer this season.

The defensive coordinator for LSU's 15-0 national championship last season is a head coach for the first time. Matt Rhule became coach of the NFL's Carolina Panthers after taking Baylor from a 1-11 record in his 2017 debut to 11 wins last year.

Gary Patterson is starting his 20th season at TCU, which was 12-13 over the past two seasons and has uncertainty at quarterback because of an off-field health issue for returning starter Max Duggan.

Since this is only TCU's ninth season in the league, Patterson technically isn't the longest-tenured Big 12 coach. Former Oklahoma State quarterback Mike Gundy is in his 16th season as head coach for his alma mater.

Kansas State is the only team coming off a winning season in its coach's debut, after going 8-5 under Chris Klieman. West Virginia was 5-7 under Neal Brown, Texas Tech 4-8 for Matt Wells and Kansas 3-9 for Les Miles, though that was an improvement for the Jayhawks.